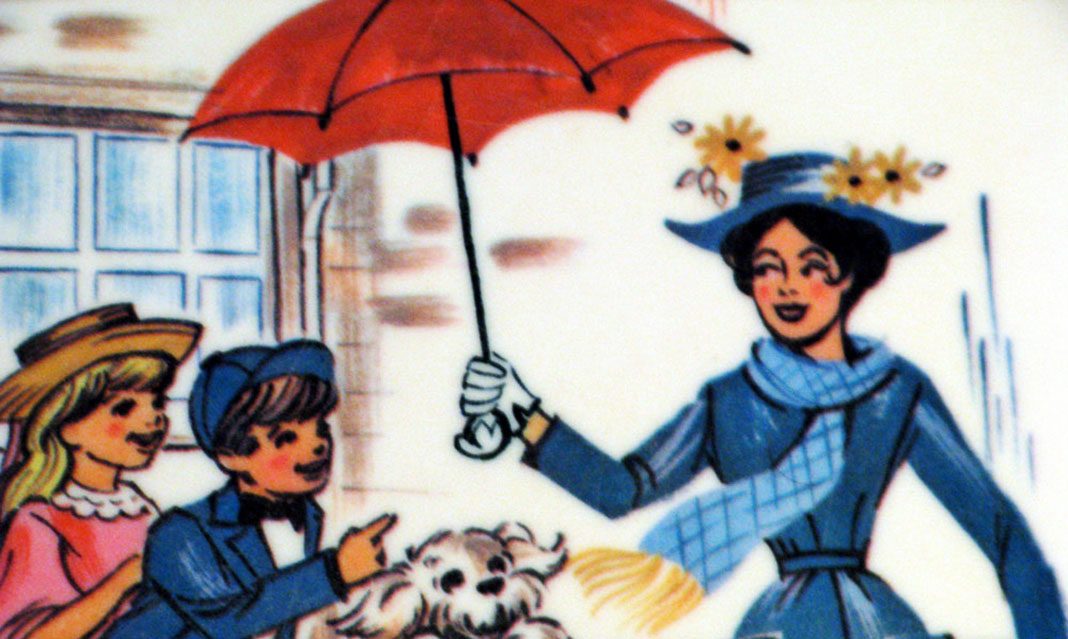 Mary Poppins is a 1964 Disney musical fantasy film, directed by Robert Stevenson. Mr. George Banks (David Tomlinson) of 17 Cherry Tree Lane runs a strict household but his children, Jane and Michael, are a little wild. After Jane and Michael run away from Katie Nanna (again) because they were chasing a kite, she quits, and George takes it upon himself to hire a new Nanny. Jane (Karen Dotrice) and Michael (Matthew Garber) just want a kinder nanny who lets them have fun, but George dismisses them. Enter Mary Poppins (Julie Andrews). Mary Poppins floats down to Cherry Tree Lane with her umbrella, claiming to have seen the ad for a new nanny, and talks her way into the job. Mary Poppins is strict with the children, making them clean their room and go to bed on time, but as she says, “in every job that must be done, there is an element of fun,” which the children love. She takes the children on adventures in London, but when the wind changes, it is time for her to leave.

Mary Poppins is a cheerful, uplifting film. It explores the joy and wonders of being a child. Mary Poppins takes Jane and Michael on the most wonderful adventures through London including into Bert’s (Dick van Dyke) chalk drawings, where they race carousel horses, go for a stroll in a picturesque meadow, dance with penguins, and sing about what they’re doing along the way. This part of the film did a really great job of combining animated and live action elements to create a visual fantasy world.

The singing and dancing doesn’t stop once a thunderstorm destroys the chalk drawings. When Jane and Michael run away from a disastrous day at the bank with their father, after Mary Poppins talked George into taking them, they run into Bert again who is working as a chimney sweep. Bert takes the children home and cleans out their fireplace while he’s there. However, they all get sucked up the chimney where there’s an elaborate song and dance number, “Step in Time,” with all the chimney sweeps of London dancing on the rooftops, which is a lot of fun to watch.

The film ends with Mary Poppins’ departure from the Banks household. While the children are heartbroken, and rightfully so, things at 17 Cherry Tree Lane have never been happier. George realizes that his family is more important than his job at the bank and surprises Jane and Michael with their kite that he has repaired and takes the whole family to the park to fly the kite and sing about it.

Mary Poppins is a story about family and fun and how your imagination and dreams can take you on the greatest adventures. The amazing score and soundtrack highlight these themes. Above all else, this movie reminds us not to take life too seriously—it’s good to laugh and have fun.