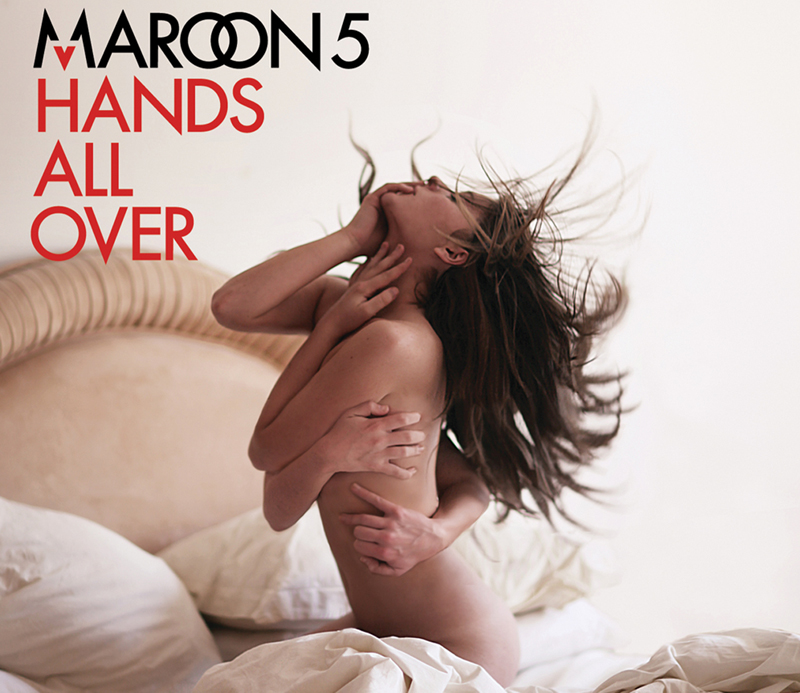 Three years after their critically acclaimed album It Won’t Be Soon Before Long, Maroon 5 is back with another pop-infused effort, Hands All Over. Unfortunately, the boys fail to make a record bigger and better than its predecessor, despite all the hype surrounding it.

Hands All Over opens with “Misery”, a track that’s done in pure Maroon 5 form: stuttering guitar, catchy vocal hook, and a choppy feel that actually works. “Give a Little More” opens with a funky (and entirely too short) instrumental opening that braces you for a pleasant change in frontman Adam Levine’s vocal register. Yet that stuttering guitar has a nostalgic feel reminiscent of their previous work.

“Stutter” is the first song to incorporate the piano, and Levine’s voice is paired beautifully with the tinkling piano and swinging “oooh”s. The latter comes back in “Don’t Know Nothing”, a number that opens with a very Motown-esque rhythm.

“Never Gonna Leave this Bed” is noticeably more melodic than the rest of the album and it’s unfortunate that this is the only slow song on the album. But alas, Maroon 5 have earned their spurs with bubblegum pop tunes, not crooning ballads.

The title track “Hands All Over” showcases Levine’s distinct voice, but with its instantly recognizable quality, he ends up sounding exactly the same on many tracks, failing to change his cadence or vary the range and tone of his voice. The stuttering guitar riffs being another of the band’s signatures, just like Levine’s voice, they become repetitive and get really boring really fast.

Nevertheless, some songs have hints of something bigger and better in them. Acoustic guitar is splashed into a couple of songs along with nice rhythm guitar work and even some tambourine. Had the band added more piano segments, not just little pinches of it, the results might have been absolutely fabulous.

Fear not, kids, there is a light at the end of the record (err, tunnel) and it comes in the form of a live rendition of Alicia Keys’ “If I Ain’t Got You”. This cover proves that Maroon 5 needs to step away from the producers they’re working with (let’s face it, this record is so over-produced that it’s a little cringe-worthy at times) and inject some acoustic love into their music. Levine’s voice is perfect in the more organic environment of the stage, and here the band complements it greatly.

If you’re looking for some shameless pop to indulge in, this is the record for you. But with its “heard one, heard ’em all” tone, consider buying just the best tracks on iTunes or Amazon—you’re not missing much if you only listen to the first few and then move on.