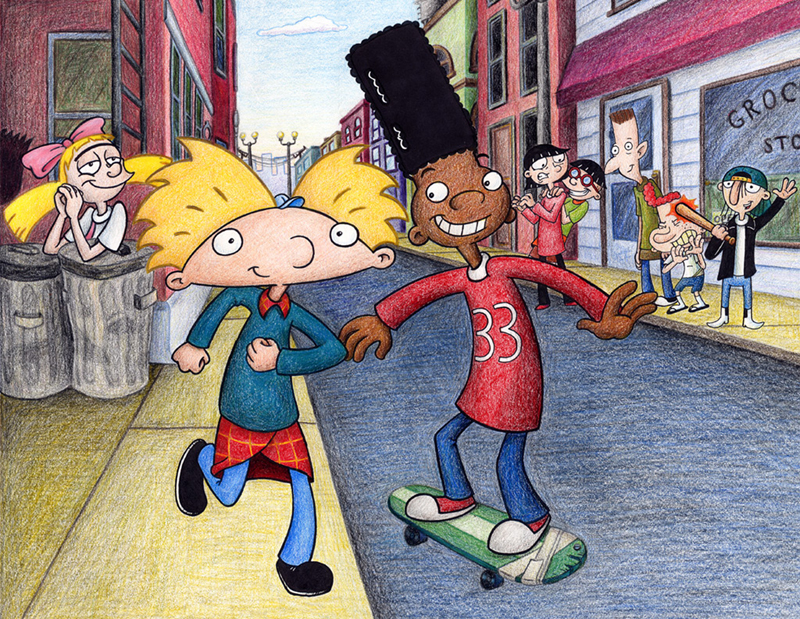 Little did our parents know that when they plunked us down in front of the television as children, they were doing us a great service. While we soaked in the TV’s bluish glow, we were also gradually building an index of indispensible knowledge. For better or worse, television brings kids together. You talked about your favourite shows at school, and you changed your viewing habits to suit those of your friends.

Also, that early exposure to pop culture gave everyone something to reminisce about 15 years after the fact.

Cartoons are a medium that seems to translate across generations of kids. But far from the crisp, sunny images of shows like The Flinstones and Looney Tunes, I remember the cartoons of our childhood being a bit rougher around the edges. Shows like Hey Arnold!, Dexter’s Laboratory, and even Rugrats had cruder animation, and more bite than a lot of the classic television cartoons. But during elementary school, it seemed like the two most ubiquitous television shows were imported from Japan. Sailor Moon and Pokémon both earned huge followings thanks to their seemingly endless merchandising opportunities. And the latter has managed to maintain popularity even now, with new episodes of Pokémon still airing worldwide.

And no discussion of ’90s cartoons would be complete without discussing The Simpsons. Aimed at an older audience, it was the show that you originally snuck past your parents to watch before it later became a staple of your after-school routine. The mid-to-late ’90s was arguably the best era for the show, giving audiences classic episodes such as “Who Shot Mr. Burns?”, “The Itchy & Scratchy & Poochie Show”, and “Mr. Plow”.

At a certain age, though, cartoons just don’t cut it anymore. Kids want realism (or at least, they think they do), and luckily, there were plenty of television shows that offered a peek into the mysterious teenage world that awaited us. A whole legion of preteen girls fell in love with Sabrina the Teenage Witch’s boyfriend, Harvey, and it seemed like everyone wished that they were part of the ragtag Tanner family from Full House.

Boy Meets World has also endured as a favourite amongst ’90s children. And despite the show’s questionable realism (no school principal is that involved in their students’ lives!), the fondness makes sense in hindsight. The show was on for seven years, and unlike a lot of shows whose characters seem to be perpetually trapped in high school, here audiences saw main character Corey Matthews go from middle school to marriage. No other medium allows for that unique character arc, and it’s a shame that most current shows don’t stick around long enough to see their viewers grow up with the cast.

And there were some ’90s shows that you didn’t even need to watch to understand the importance of.

Despite the fact that I didn’t watch The Fresh Prince of Bel-Air or Dawson’s Creek while they was on the air, I know the theme songs, I know the character names, and I know the Carlton dance. Perhaps it’s because various cast members have gone on to successful adult careers, but it seems like both shows have held up surprisingly well in our popular culture’s collective memory. I can’t think of many current shows aimed at teenagers that seem like they’ll have the same kind of staying power, except maybe The O.C.

It’s amazing how vividly I remember these shows, right down to specific episode plotlines. Maybe it’s because of the necessary investment. Television forces you to sit down every week in order to follow your favourite shows (or at least it did, pre-DVD and Internet streaming). And as kids who are prone to getting swept up in fantasy, it leaves an undeniably lasting impact.