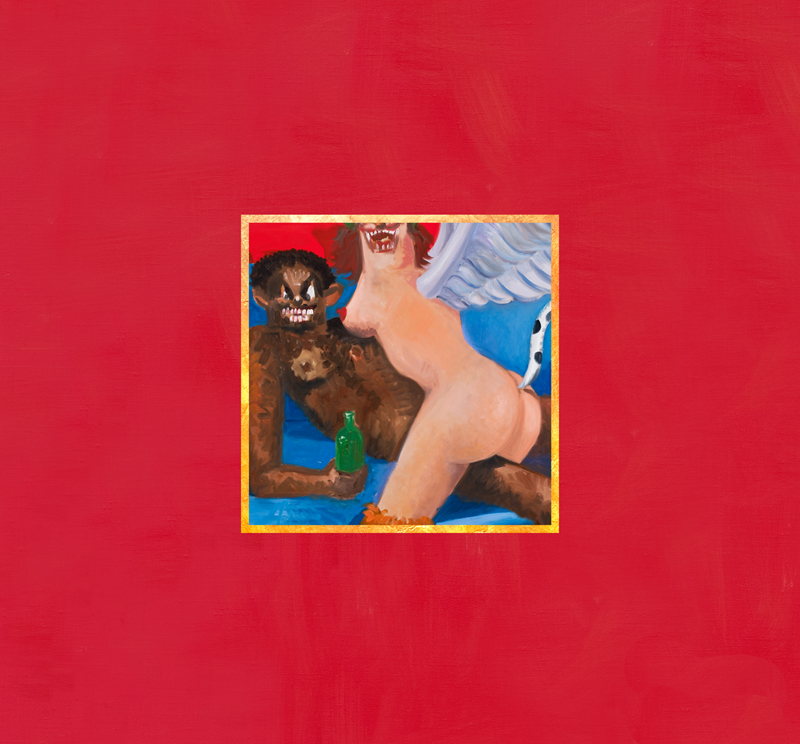 Sometimes it’s really hard to like Kanye West, but his musical abilities should be respected whether you like him or not. Aside from being a musician, Kanye has been at the heart of many of this year’s greatest controversies, and his new album, My Beautiful Dark Twisted Fantasy, is no exception. The cover art for this album caused quite a stir, and as a result it was banned from virtually every store, online or otherwise. Kanye was adamant in his defence of the picture, but it was still frowned upon and denied sale, even after he came out with five other, more tame cover arts. Regardless of the cover, though, the album itself was hyped to shocking levels.

After receiving a coveted five-star rating from Rolling Stone, everyone was up in arms over My Beautiful Dark Twisted Fantasy. Some slammed it as a piece of satanic garbage while others were praising it as one of the best albums in a long time.

The album opens with “Dark Fantasy”, in which Nicki Minaj’s powerful voice is the first thing to grace our ears, as her narration melts into a great choir intro. This track is a good testament to Kanye’s production skills; not only does it flow like honey, but it has a great swagger to it.

“Gorgeous” and “Power” are the next two tracks, both of which keep the album’s momentum going strong. Kid Cudi’s contribution on “Gorgeous” makes the song what it is, while “Power” was one of his G.O.O.D Friday tracks, though it doesn’t live to the album version. The two have a similar feel, but the final version is far more refined and it has a new level of depth to it.

“All the Lights (Interlude)” feels completely unexpected, but is still welcomed with open arms. It is a

simple and painfully beautiful piano/violin combo that works so well as a break between the previous song and the next track, “All the Lights”. The interlude is contrasted by its melodic construction, but they just work so well together and the flow from one to the other is spot-on.

“Monster” and “So Appalled” mark the point where the album starts to falter a bit. Since the tracks on My Beautiful Dark Twisted Fantasy are, for the most part, over four minutes long, they either get good or they get boring. These two got boring. Jay Z and Nicki Minaj do bring some relief through their vocal work and lyrics, but the songs are skippable.

“Devil in a New Dress” shows a pleasant upswing. The intro really sets the tone for the track and the melody is great. “Runaway”, at an impressive nine minutes eight seconds, is another heavy-hitter on the album. The vacant piano builds into a solid rhythm and it just keeps getting better. The bridge merges into the outro and though it doesn’t really change, you can’t bring yourself to skip it. It’s another number on the album that just works, plain and simple.

“Hell of a Life” is repetitive and boring, but “Blame Game” saves the day. John Legend’s contribution to this song paired with the Aphex Twin sample brings the tune to a whole new level. “Lost in the World”, the unlikely contender, begins with a droning auto-tune that actually sounds better in real life than it does on paper. It’s another instance where something so unlikely just works.

“Who Will Survive in America” is a throwback to the 1950s with its startling but somewhat refreshing quality. It’s a preacher speaking some incredibly thought-provoking words, and at the end of this album it is the perfect close.

My Beautiful Dark Twisted Fantasy is a must-have album, so even if you don’t like Kanye West, buy the album anyways. Obnoxious rapper or musical godsend, you still have to give him his props because he’s earned them with this latest effort. It’s not quite perfect from start to finish, but it’s pretty damn close.