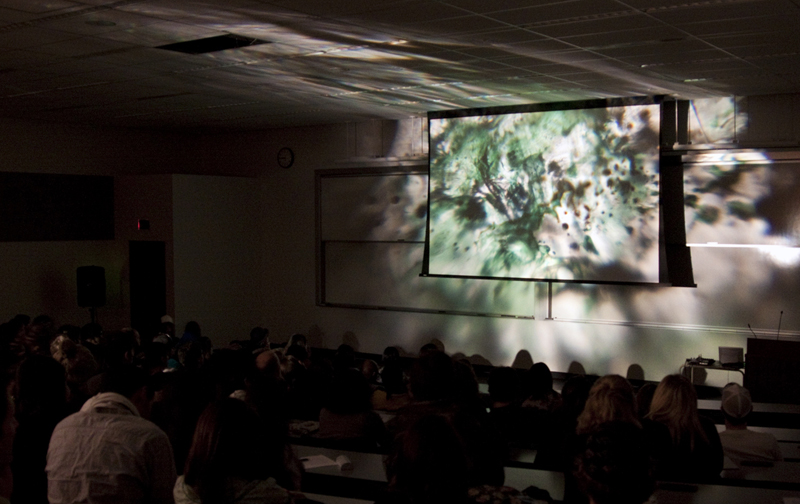 This past Friday night, lecture hall IB245 was transformed. With a diverse audience on hand (a combination of  students and various members of the community), the energy was palpable. This wasn’t a typical lecture. In this rare opportunity, rather than merely discussing the works of an influential artist, the audience got to see one in action. Artist and filmmaker Ken Jacobs performed his “Nervous Magic Lantern”  presentation for a packed crowd, and it was certainly something to behold.

The name Ken Jacobs may not be familiar to all, but his influence in the art world is difficult to deny. After studying with groundbreaking abstract expressionist painter Hans Hoffman in the 1950s, Jacobs began to produce his own avant-garde films, and he also began to take on an active role in the art community. He cofounded the Millennium Film Workshop in New York City, and also helped to found Binghamton University’s first department of cinema. His own work has been displayed and  performed at the Louvre, the Museum of Modern Art, and the New York Film Festival.

His “Nervous Magic Lantern”  performance is described as “live cinema without film”. In the hour-long performance, Jacobs uses a special projector with a lens that allows him to manipulate and magnify small objects without the use of  celluloid or pre-recorded visuals. The result is a kaleidoscopic, abstract image that is truly one of a kind—no two “Nervous Magic Lantern” performances are alike, and since they’re not film  recordings, they exist in this form only during the performance.

As Jacobs manipulates the projections, they take new shapes and forms, becoming almost hypnotic at times. Though there are no  definable objects on the screen, they seem strangely organic. It’s like the game we all played as children: looking for shapes in the clouds. As his images morph and magnify, you may think  you spot a human face or some other form in the abstraction,  but as suddenly as you recognize it, it vanishes. The images are  also accompanied by an audio track that begins in a bustling subway terminal, complete with the sound of buskers and whooshing trains. As the presentation goes on, the sounds change subtly and eventually lead to the street-level bustle of  children and car horns. This is the only aspect of the performance that offers anything resembling a narrative, and it perfectly complements the  ambiguous shapes on screen without distracting from them.

Following the presentation, Jacobs took questions from the audience, and he proved to be a charming and funny public speaker. Many questions focussed on the more technical aspects of his projector setup, and it was  fascinating to get a peek into  how he creates his abstract images. Jacobs also spoke about his  admiration for the spontaneity of artists such as Jackson Pollock and Willem de Kooning (both of whom were contemporaries of Hoffman). Between Jacobs’  amiable persona and his fascinating, thought-provoking performance, “Nervous Magic Lantern” was a unique experience in multiple ways.

The performance was presented by the Blackwood Gallery in conjunction with their current installation exhibit, Lost Secrets of the Royal, which runs until December 11. For more information, visit blackwoodgallery.ca.