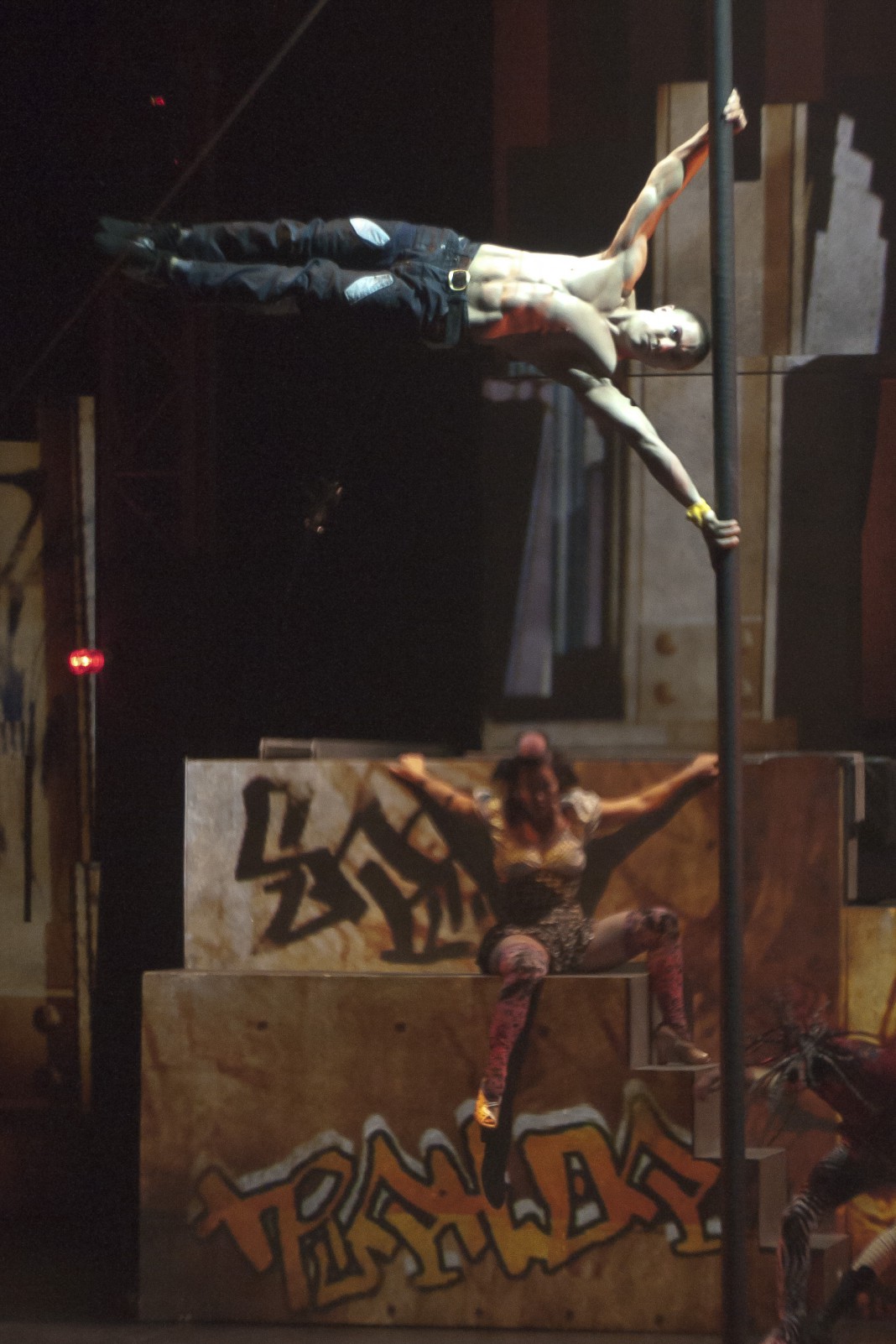 First it was the O’Keefe Centre in 1960, and then it became the more popularly known Hummingbird Centre in 1996. Now, after being closed and undergoing renovations for two years, the historical theatre reopened its doors on October 1 as the new Sony Centre for the Performing Arts, exactly 50 years after the very first performance at the O’Keefe Centre on October 1, 1960. Home to countless memories, historical relevance, and famous performances (the likes of Julie Andrews, Louis Armstrong, and Liza Minnelli are just a few), the newly designed and freshly invigorated venue kicked off its grand re-opening with an electrically charged performance by Cirque Éloize—a troupe of acrobats, dancers, contortionists, and entertainers founded in 1993 and based in Montréal, who have taken the world by storm.

First performed in August 2009, Cirque Éloize’s latest creation, iD, blends an array of youth culture with the urban dance scene, as every individual strives to find an identity among the hustle and bustle of the city streets. “[It is] an area for encounters, a site of passage, a ’hood where clans confront one another, where friendships are woven—where love is created and dissolved,” explains director Jeannot Painchaud.

From its opening moments, iD is an enthralling assault on the senses. The sounds of sirens wailing, jackhammers drilling, and car engines revving up fill the darkened theatre before any visual elements take shape. The auditory flux continues as the curtain rises to reveal a cityscape with people indifferently moving past each other in their daily routines, but the static is finally broken when a reluctant couple reveals the ultimate trust in their relationship through a series of acrobatic flips and throws. Among these aerial acrobatics is moment in which the man tosses the woman up and balances her on one arm, all the while feeding off of the audience’s gasps of fear and awe.

The second act takes place in graffiti-filled streets. A man on a Chinese pole holds extreme positions, such as when he uses his brute arm strength to horizontally hold himself in place, lying in the air as if gravity has ceased to exist. Following this early crowd favourite, a bicyclist takes the stage on a two-wheeler without a seat in which he jumps the bike up a series of wooden blocks (with no shortage of tricks in between) and the humour infused through the cyclist’s controlled manoeuvres, which could easily have ended in disaster, garnered loud applause and whistling as he rode off the stage and around the orchestra pit.

The high-octane energy is then slowed down as a female contortionist and male breakdancer writhe their bodies across the stage under a starry sky. It is the contortionist who evokes shock with her seemingly infinite flexibility. Lying on her stomach, she brings her legs over her head and places her feet down on the stage in front of her face, then, like a creepy crawler, scurries her feet around her contorted body in a circular fashion, much to the disbelief of the onlookers. The metronomic sounds of the city then return, as a construction scene unfolds and tennis balls rain down onto the stage. A man in a red suit emerges, followed by the workers carrying panels of glass above their heads, and begins juggling numerous tennis balls at a time, increasing his speed and technique, and eventually using the glass panels as he lies on his back and pelts the tennis balls upside down against the barrier.

More acts feature a girl swinging around on a trapeze to the aptly titled song “Outta Control”, the return of the bicyclist as he jumps the metal frame above a slightly petrified volunteer from the audience, and a selection of hip-hop dancers, breakdancers, and acrobats doing their thing while double-dutch jump ropes come down on them.

The performance resumes with a mechanically pulsating beat as performers dance in slow motion around wooden chairs, which they then pass off to a man who stacks them up one by one and balances himself on the topmost chair, some five metres in the air, and extends his body vertically so that he is doing a handstand on the very unstable cross-rail of the chair. The contortionist then returns, only to be chased by a young man, both of whom swing themselves up and around the set to the perfectly timed music against the projected images of the scene, in which she races against time to squeeze through a black-hole like opening in the wall before it disappears.

The closing performances were some of the strongest: Josianne Levasseur’s mastery of a large hula hoop-like ring, in which she resembles da Vinci’s Vitruvian Man as she spins around the stage inside it, never once losing balance from the obvious dizziness that ensued; and a hip-hop-inspired acrobatic segment that incorporates all of iD’s performers as they bounce in, on, and around a trampo-wall, jumping over and beside each other in a perfectly timed fashion, pumping the crowd up as breakdancers spin faster and faster on their heads alongside them.

One of the show’s best features is the smooth transitioning of circus disciplines while still maintaining a cohesive feel; the end of each segment is met with darkness timed to dramatic music, so that performers can address the technical side of the performance in setting up the next scene, while the audience is given time to appreciate the previous performance before the next set of dancers and acrobats hits the stage.

Yet it is the use of the projected image which really gives life to the stage, effortlessly changing the scene from a grungy, graffiti-covered street to a serene cityscape illuminated by the moon, and several others. The stage itself is just a wooden frame for the performers to move in and out of, and so the meticulous work of iD’s technical, production, and creative teams truly enhance the magical feel typical of Cirque shows.

Following the performance, which received two standing ovations, fireworks illuminated the night sky above the Sony Centre and ended the exhilarating night with a bang. Cirque Éloize’s iD runs until Saturday, October 9, at the Sony Centre on 1 Front Street. Visit www.ticketmaster.ca for tickets, or join the Sony Centre’s “Under 30 Rush Club” at www.sonycentre.ca/under30 for a free membership that offers $15 tickets to select shows.