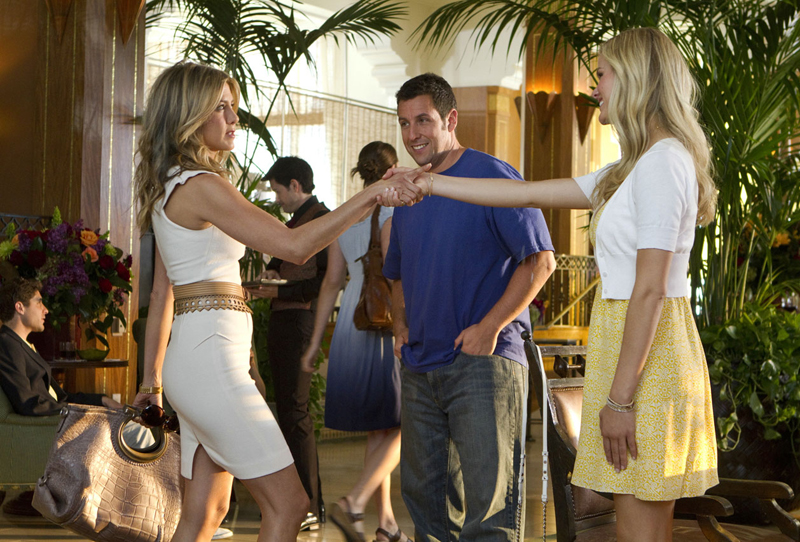 Adam Sandler’s new comedy is one very tangled web of lies. The comedian is known for his “stupid-funny” films, and while Just Go With It isn’t always smart, it sure is funny. With a very strong cast and some very hilarious moments, this movie works in ways that one wouldn’t expect from the very overdone concept it proposes.

Sandler plays Danny, a plastic surgeon that pretends he is unhappily married in order to pick up girls, sleep with them, and have a reason to leave in the morning. But this plan doesn’t work out too well when he finally meets The One, a young, gorgeous girl named Palmer, played by model Brooklyn Decker. It’s very hard to imagine her wanting any kind of romantic relationship with Adam Sandler—who isn’t too happy to have a wedding ring in his pocket after they’ve spent the night together. Danny is quick with a cover, however; he says he’s actually in the finalization process of a divorce. But when Palmer wants to meet his soon-to-be ex-wife, a lot of improvisation ensues. Danny persuades his loyal assistant Katherine (Jennifer Aniston), and even her children, to be his fake family. On top of that, Danny’s geeky, desperate, cousin Eddie (Nick Swardson), decides he wants in on the situation and takes his chance to get with Katherine, pretending to be the lover that she left Danny for. Circumstances take this dysfunctional crew to Hawaii, where things only get more complicated and at times, absolutely ridiculous.

Although the film is formulaic and predictable and relies on many “hit in the crotch” kind of jokes, it also has some genuinely funny moments, and is even at times heartfelt, mainly due to the chemistry between Sandler and Aniston. The two, who have been friends for many years, are working together for the first time; their familiarity with each other is apparent in roles that especially require their characters to have a strong bond. Both are most respected for their comedic work, and Sandler and Aniston are the element that really holds this movie together, as they handle material that could have been very cliché and unfunny but breathe life into it. Also standing out in the cast are the children that play Aniston’s kids, who are adorable and conniving at the same time. Swardson also shines as the incredibly stupid Eddie, a character that could have been extremely annoying, but actually turns out to be quite loveable. The weak link in the cast is Decker, who isn’t given much to work with as the incredibly one-dimensional Palmer. She may be a decent actress, but it’s hard to tell, as there’s absolutely no depth to her character—which is a little unfortunate considering the movie that this is a remake of, 1969’s Cactus Flower, won an Oscar for Goldie Hawn in the same role. Another member of the cast who helps hold the film together is Nicole Kidman, who plays Aniston’s nemesis from high school. It is a nice change to see Kidman taking on a comedic role, especially after her emotionally charged, Oscar-nominated performance in Rabbit Hole.

As a side note, had Just Go With It been better edited, it would have been a more spot-on comedy, because there are times when moments linger and the jokes aren’t laugh-out-loud funny. As the film progresses, it gets more fast-paced and more consistent, but the beginning portion feels a little dry, and there are some “trying-too-hard-to-be-funny” moments. Had those been left to the deleted scenes on the DVD, the film would have been much sharper.

Overall, Just Go With It is just what you would expect from any typical Adam Sandler comedy. It’s a bit far-fetched and silly, but still very funny. With some beautiful scenery of Hawaii and a very fun soundtrack, there are many elements that help lift this film and make it worth watching.