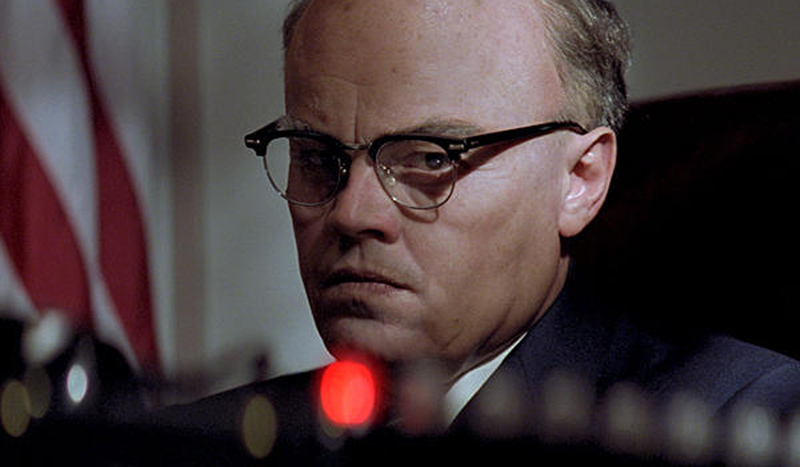 I had read several negative reviews that put a serious damper on my hopes for J. Edgar, but after sitting in my theatre seat for 137 minutes completely captivated, I couldn’t help but wonder if the critics watched the same movie I did.

John Edgar Hoover was an  incredibly closed down and petulant megalomaniac, and everything about the cinematography—from the desaturation to the use of shadows and angles—reflected this quality well. The non-linear structure of the film also lent itself well to the more subtle symbolism pertaining to the mystery surrounding Hoover, which I unfortunately cannot delve too deep into without spoiling the film.

Leonardo DiCaprio’s portrayal of Hoover gives perhaps his most fully realized and persuasive performance yet. He is absolutely brilliant from start to finish in his speech and mannerisms. Even under a thick mask of prosthetic skin and added body weight, DiCaprio  delivers an incredible portrayal of the legendary director of the FBI. But he isn’t the only star in the film: Armie Hammer as Hoover’s trusted companion Clyde Tolson deserves some praise as well.

Admittedly, I was drawn to J.  Edgar when it was first announced because of Leo, but Hammer gave such a gripping rendition of  Tolson that it caught me off guard. A lot of people are shining a light on DiCaprio this year to win big during this year’s award’s season, but I won’t be surprised if Hammer receives a few nominations, and hopefully wins as well. He brings Tolson to life in such a way that you can’t help but feel pity for him on screen. For such a young actor, his effort in this role, especially when he was aged to play Tolson later in his life, is both believable and magnificent.

Clint Eastwood’s direction, paired with Dustin Lance Black’s screenplay, create a movie that, while sometimes dull, delivers shot after shot of brilliant filmmaking. J. Edgar is a very nuanced film, and I’m fairly certain that’s the reason behind its love/hate reputation up to this point. Nothing about it is very “in your face”, but it’s mindfully compelling and remarkably moving. In true Eastwood style, the film leaves you with teary eyes, and it’s not hard to feel like you’ve just watched one of the most powerful movies of the year.