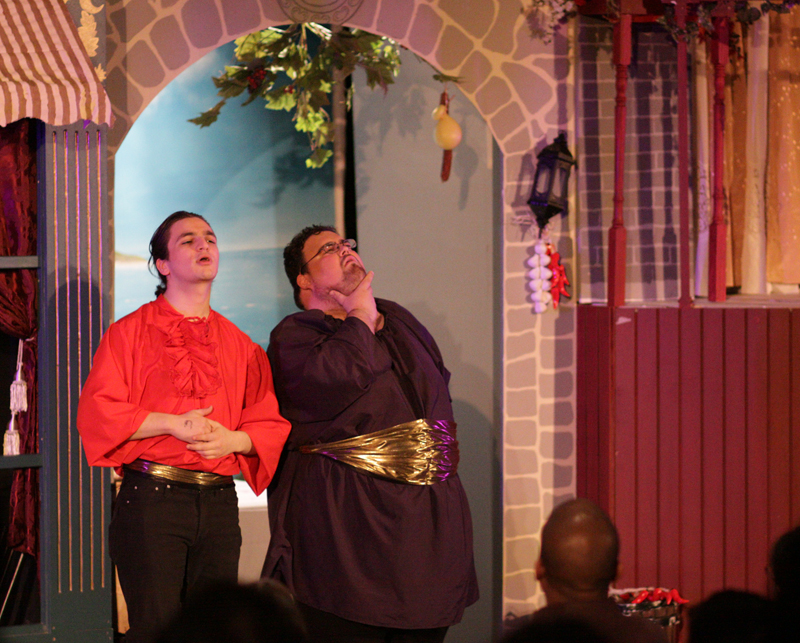 Buona sera a tutti and welcome to a night of scheming, scandals, and screw-ups, Italian style. La Calandria, this year’s Italian production at UTM, opened this weekend to a diverse and appreciative crowd of students and Mississauga residents.

Originally written in Italian prose in 1470 by cardinal and playwright Bernardo Dovizi da Bibbiena, La Calandria is a surprisingly modern comedy, full of humour that spectators of any age can enjoy. To follow the plot, a little background is required. Lidio and Santilla are twins that are separated at the age of six when their father perishes in Modena in an attack by the Turks. Under the impression that Lidio had been killed, Santilla’s servant dresses the young girl as a boy and gives her Lidio’s name. They are captured and then brought to Rome by a Florentine merchant. The merchant brings the captives to Rome where he decides to give his daughter in marriage to Santilla, who is still dressed as Lidio.

While Santilla is busy with her own misfortune, Lidio and his servant, Fessenio, venture to Rome. Lidio dresses in drag to keep his affair with Fulvia, the wife of Calandro, under wraps. Lidio scampers around Rome dressed as Santilla and Santilla connives dressed as Lidio. Calandro, the city’s fool, falls in love with Lidio, who is still dressed as Santilla, and asks Lidio’s servant, Fessenio, for romantic advice. Lidio decides it’s probably best to stay away from Fulvia and Calandro until matters settle down. In the meantime, Fulvia, undergoing a crazed search for her lover, sees Santilla, dressed as Lidio. Santilla agrees to meet with Fulvia to escape her own tangled mess of a wedding.

Confused? So were the native speakers of Italian. After all the confusion, Lidio and Santilla find each other at last, and the problem is resolved.

A product of the third-year Italian Text and Performance class, the cast is made up, not of hopeful actors, but of students dedicated to the Italian language andculture. This passion shines through in their performances.

Luigi Giangrande as Fessenio and Matthew Lima as Calandro give fantastic comedic performances, lighting up the stage with their playful gestures. Karolina Frasunkiewicz went above and beyond in her performance as the love-crazed Fulvia, while Antoinette Battaglia gives a believable and engrossing performance as Samia, Fulvia’s servant, and pulled the audience along with all the chaos and confusion.

Alanna Bolotta and Christian Tribuzio do an astonishing job of playing the twins,  who act, speak, and look the same. Michael Esposito as Fannio and Ivanca Naje as the narrator command the stage and brighten the play, even when the audience is confused by the twists and turns in the plot. Robert Rogers as Ruffo keeps the audience laughing with his honest and comedic performance.

In this, the first time professor Teresa Lobalsamo has taken on the Italian Text and Performance course, she exceeded her duties in directing a cast without theatrical training and invoking passion in students.

The final showing of La Calandria takes place Saturday, March 12 in CCT 1080. Visit the Italian Department for more information. English subtitles are projected onto an overhead screen, so all audiences will be able to enjoy the spectacle.