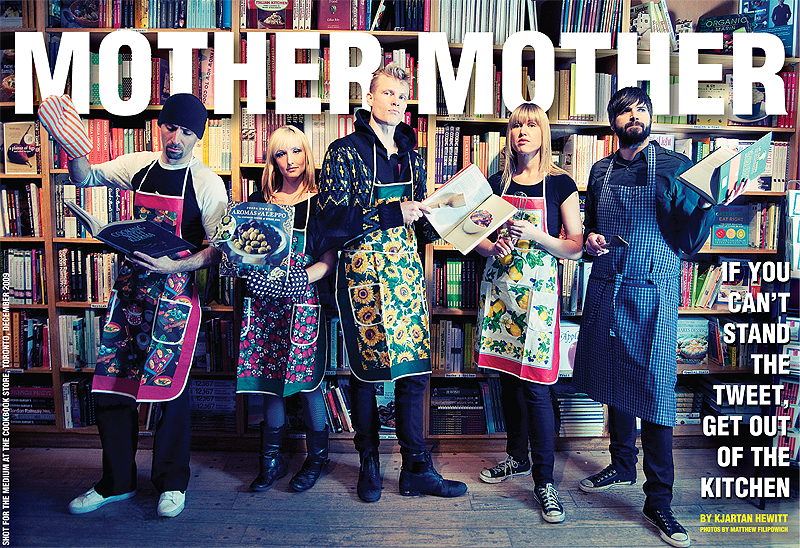 A couple years ago, during Canadian Music Week, I watched a group on the cusp of stardom. They were playing post-Benjamin Gibbard pitch-corrected power pop for a room full of screaming, gooby 16-year-olds. This was the beginning of a movement in pop that would lead to the Owl City single I hear everywhere I go today. Everyone in the room talked about how this group would be the next big thing, but today I dont remember who it was. I stood by the bar during their set, nodded my head, drank my Molson 50 like an old man and plotted my exit. It was the next band to play that really caught my attention.

Mother Mother took the stage. Intrigued, I decided to stick around. Two blond women on either side of the stage backed this tall, foppish lead singer with a blond pompadour. Besides just having an interesting look, something about them popped out at me.

The harmonies, the guitar fills and the lyrics. It was so fucking clever. There are a million songs with the same three chords that spout out something relatable (rhyme girl with world and youre set. They usually are enjoyable, because those three chords sound nice together. But this was something beyond palatable pop music. What I felt was the exhilaration of witnessing good ideas, musical and otherwise, refined by talent and presented with rehearsed perfection. I know that just sounds like a long compliment that may not mean anything, but by the time they played the song Verbatim, I was really enthralled.

Taking in a live performance of a group Ive never seen before can often be boring, tedious even. I wont even like a song until Ive heard it a few times. With Mother Mother, my interest was peaked. The way they moved through a song was like watching Joe Orton play, so quick-witted and sharp that youre left gawking and wondering what else the players can show you within the confines of one room. I got hold of their album Touch Up as soon as I could after the show. I would push it on whoever would listen, forcing it on anyone in the car with me, the same way I would The Library Voices when I heard them the following year.

Its one thing to share the things you enjoy with your friends, but sometimes I take a gross kind of pride in knowing about a band my friends will like before theyve heard it. I kept that album in the car for months.

Two years and an album later, we got to catch up with lead singer Ryan Guldemond, pompadour intact, in Toronto before their appearance on MTV live. Toronto was the last stop on their six-week tour supporting Matthew Good at Massey Hall. A calm, deliberate Guldemond shared a bit about his experience over the last two years, his bands new album, their next album and Twitter.

So whats Matt Good like?
Hes nice. Hes a little incognito, but the chances that we have with him are fun and down to earth and, yeah, hes been nothing but gracious to us. Hes a funny guy, got a good sense of humour.

You were touring with Sam Roberts before that. Do you prefer having a headlining tour?
Its nice to throw your own party, but at the same time its advantageous to be in front of people you normally wouldnt be. Theres an element of needing to be cautious of an environment that isnt yours when you open that might not be ideal in every sense, but theres a tradeoff for that when youre opening for someone who has a bigger fanbase than your own.

When can we expect a new album?
Were writing and planning the recording session, which will take place in spring 2010. Hopefully, a release will follow in the fall.

Will you be working with producer Howard Redekopp (Tegan and Sarah, New Pornographers) again?
Were not this time. Were going to try to branch out. Not sure just how that will all… unfold.

Have you chosen a producer?
No, we havent. Sort of just in the young stages of speculation and consideration.

In your album Touch Up, it was obvious youd written the album on a guitar. Where as O My Heart, you expanded the sound with all the synth and strings. Can we expect a shift into the more electric or orchestral with the new album?
More electric and less orchestral. We really want to make an album that symbolizes what the band is capable of doing, and not really go beyond those means. With O My Heart, we treated each song as a blank canvas and infiltrated any instrument in order to realize the music. With this album, we want to make it more of a band effort. Theres voice and drums and bass and guitar and synthesizers and keyboard… Thats an interesting pallet of sounds that we kind of want to delve into each of those chasms. So when the band plays live, its a true representation of the record.

So when you put the songs together, is it a concerted effort? Or is it something youve built and then presented to the band?
It works both ways. With this new batch of songs, its been a concerted effort to allow the songs to take shape by way of collaborations within the band. So essentially I will reserve my conceptualizing until we all get in there and start handling the direction. Thats kind of what were going for.

In songs like Touch up, Ball Cap, and Body, theres a lot of physical imagery. I get the sense of an esthetic preoccupation, both male and female. How did that come about?

Those words are phonetically pleasing. Theres so much imagery and symbolism in anatomy and emotional subject matter. The heart represents love, or hate, you know, if its broken. And, blood and bones, I mean, all this stuff is very metaphorically useful and handy when even touching on the simplest of emotional topics. You just get drawn to it. Its not really premeditated.

Youve got a lot of dark content set against really charming, catchy music. Does that reflect any personal philosophy?
I think that could speak of an element of cynicism. To paint a picture of our… you know, not to take the melancholy too seriously. By dressing it up with something very opposite, I think, almost accentuates the sadness, instead of being really dark through and through.

You told The Pulse in Niagara that youre so much about Twittering…
Not so crazy about twittering.

Can you relate that to some of the Country Boy imagery in songs like Dirty Town ?
I grew up on Quadra Island. That song is just a metaphor for getting away from a place that isnt necessarily healthy. Its also, I dont know, a bit of a shout out to more traditional living and approaches. Im a bit of a ludite, and I also think that much the technological craze that is happening and has happened is not completely necessary. I think that therere some human qualities to our society and interactions that are kind of being wiped out by this rapid evolution of technology and computers and accessibility.
Like with Twitter?
I dont know if its a realistic extension of peoples true characters. I think that theres a fabrication of persona that takes place in that cyber realm, which is incongruous to what is actually going on with those people.

Do you think its self-serving or egotistical to have that wide and constant and output?
I just find it somewhat fraudulent. I think its good to extend yourself as an artist or a band. But its nice to keep in the theme of what youre doing in the first place, which is making music. I dont know why so much of a spectacle needs to be made of our personas in order to have a career. Theres so much emphasis placed on that. If you want to go far, become a caricature and tweet about it. I dont know, it just doesnt make sense to me. It just feels unnatural, unhealthy and displaced against what I set out to do to begin with.

Art and honesty have to go hand in hand?
Yeah, you have to be honest with everything that you do. Otherwise youre going to go to bed guilty. Maybe that isnt the case for some people. Im just fairly sensitive that way. I just feel like Im letting myself down if theres something dishonest in any facet of what this band is doing.

Can you think of any bad cooking puns for this article to go with the pictorial?
Cooking puns? Um, no. Mother Mothers milk? I dunno. Mother Mother Wok on the wild side (laughs) as in W, O, K like a wok. The wok pun has been done a lot. There was even the show, do you remember that show? Where he always had an apron with a different wok pun?