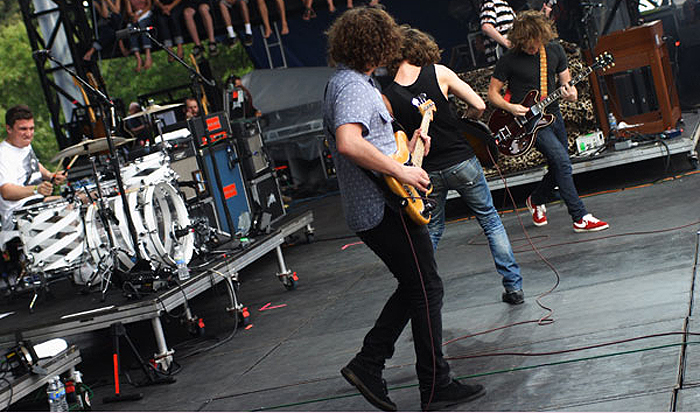 The Arctic Monkeys are one of those bands that aren’t afraid to speak their minds. Whether they are slagging off another band (that’s British for dissing someone) or accepting awards while intoxicated, they never fail to catch the interest of our generation. Yet, the Sheffield quartet seem to have matured a little, as the songs off their third album, Humbug, will surely confirm.
Produced by Josh Homme (Queens of the Stone Age), Humbug deviates from the band’s standard electro-pop dance style in exchange for darker and moodier melodies, a style completely unfamiliar to their fans. Yet the Monkeys were still able to win their fans back over as they played a sold-out show at the Kool Haus last Tuesday.
Despite rumours about the possible choice of The Klaxons as the Monkeys’ opening act, many fans were disappointed to find out that it was indeed just speculation. The band’s permanent supporting act for their North American tour was The Like, an all-female group from Southern California. The group has taken lots of heat from Arctic Monkeys fans during the current tour. Their style is nothing like that of the Monkeys’ and as a result they failed to pump up the crowd sufficiently for the main act.
Despite Elizabeth ‘Z’ Berg’s great style and charming chitchat with members of the audience, the rest of the band seemed amateur as they shied away behind their instruments, but the band received praise for songs like “He’s Not a Boy” and “Fair Game.” Though it is possible that the positive reaction from the crowd could have been a result of the illegal substance being passed around all night long.
Even before the Monkeys hit the stage, security guards began pulling people out of the audience after catching them smoking marijuana. When Alex Turner and the boys finally emerged onto the stage, he was surprised by the rambunctious behaviour of dozens of pot smokers and crowd surfers. “Toronto, youre mischievous. Naughty, naughty Toronto,” he scolded. Despite all the commotion, the band’s flawless performances perfectly recreated the tracks as they sound on the record.

However, this flawless recreation caused the performance to become rather flat. Turner’s replication of lyrics in the exact same pitch and arrangement as the recordings left no room for spontaneity the band could have exercised. Their gusto was evident from the opening track “Dance Little Liar” to the final song of the night, “505,” but their energy was limited in the performance aspect only, as they either forgot or chose not to engage with the crowd on a grand scale.
Regardless, their fans didn’t seem to mind in the slightest. They made up for the band’s lacking connection with the audience by overcompensating with jumping and pushing as close as they could to the stage.
Just over a month since the band’s latest record was released, fans already knew the words to “Crying Lightning” and “Potion Approaching” and screamed the lyrics even louder to favourites such as “I Bet You Look Good on the Dancefloor” and “Brianstorm”. Nevertheless, it was difficult to ignore how Turner barely moved around the stage or parted from his guitar, and he lacked the showmanship that audiences have come to expect of the band’s front man.
Perhaps it has something to do with the band’s desire to be taken more seriously as musicians, rather than goofing off and causing trouble in the press as they had previously done in their adolescence. They have certainly adopted a new look: out with the striped cardigans and bowl haircuts, in with the shaggy hair and collared shirts.
Yet despite all of the changes the Monkeys have undergone, Turner was extremely appreciative of the support the band received in Toronto and treated the crowd to almost 20 songs over the course of the evening. The Arctic Monkeys remain one of the best new alternative rock bands of the past few years, drawing comparisons to the like of Oasis, not to mention their debut album becoming the fastest-selling record in UK chart history.