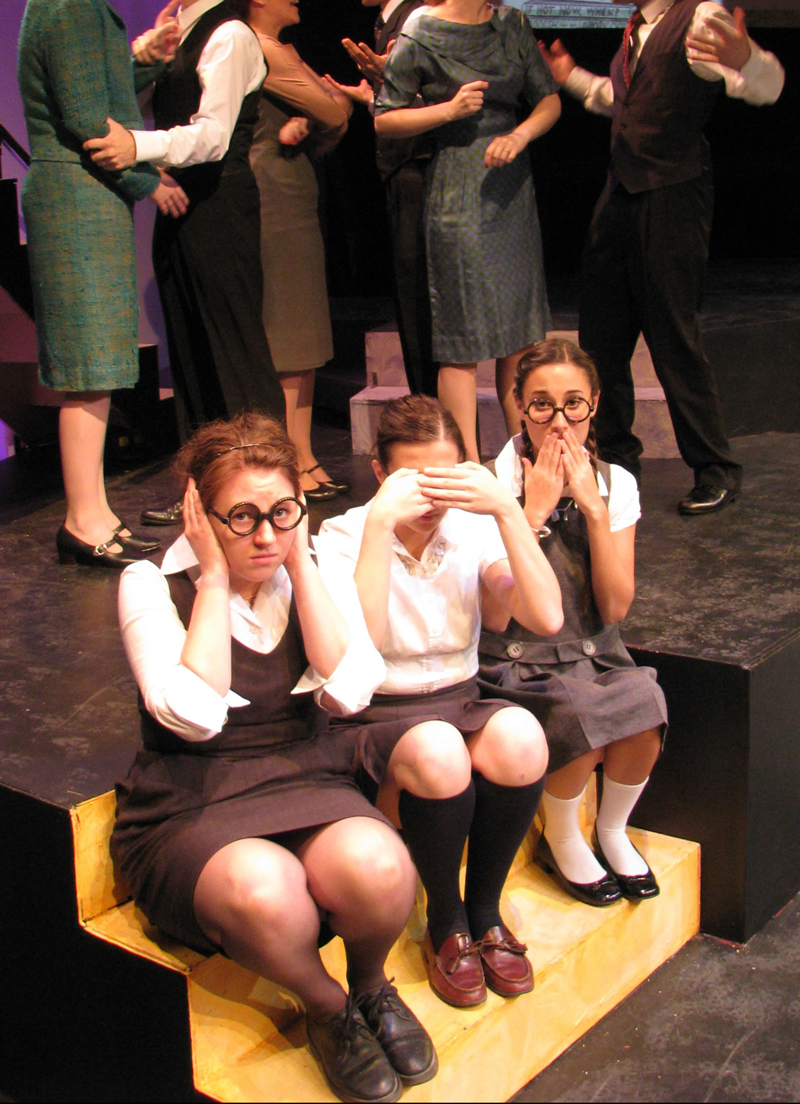 It has been over six decades since the atrocities of Holocaust came to an end, but the memories are still lingering. How could they not? The effects of the horrific genocide not only changed the lives of its survivors, but of their children as well. One such child of Holocaust survivors is Bernice Eisenstein, who provided Theatre Erindale with the permission to stage an adaptation of her renowned memoir, I Was a Child of Holocaust Survivors. With Eisenstein in the audience on the opening night of Theatre Erindale’s latest production, A Child of Survivors, the third-year ensemble of Theatre and Drama Studies had a lot resting on their shoulders. Yet, under the direction of Ralph Small, the cast managed to produce an extremely authentic and heartfelt performance, balancing fond memories with painful ones, all the while tastefully blending humour into a serious topic.

The audience is immediately thrown into the bustling streets of Kensington Market, the hub of the Jewish community in downtown Toronto for many decades in the early 20th century. The young Bernice (Brittany Kay) befriends the audience as she introduces her family, reveals the traditions of her Jewish heritage, and appeals for answers: what has happened to her parents’ eyes? Their memories of the Holocaust have become just as real for Bernice, who tries to understand what her parents Regina and Ben (Jessica Allen and Jake Maric) went through all those years ago. The play moves back and forth throughout Bernice’s life, focussing on her family during her teenage years as well as life in adulthood, yet a trace of her childlike wonder always remains. Allen and Maric portray the happier times of their life, as depicted by their slow-motion marriage to signify the past, yet they also represent the parents that emerge from the Holocaust, before bringing Bernice into the world. In a matter of seconds, the stage is transformed from a scene of rapture in the familiar Jewish neighbourhood, into one of a haunting location, as the ghosts of murdered Holocaust victims emerge in identical white masks amidst a heavy cloud of smoke, sounding eerily like the release of gas into the air. Kylah Thomson and Julio Ospina play Regina and Ben during harder times, as they experience marital problems as a result of Ben’s loss of money through gambling, all the while trying to raise the teenaged Bernice (Tanya Filipopoulos). She is still looking for answers that others are trying to forget, and we learn of her strained relationship with her father. Yet there is a deep sense of resolution as the adult Bernice (Heather Dennis) comes to the aid of her parents (Emily Johnston and Adam Cresswell), now in their old age and more fragile than ever as the memories of the past are almost too much to bare. Revelations are made, relationships are strengthened, and lives are altered in profound ways.

The large company of 23 actors and actresses at first seemed slightly overwhelming, as they are all onstage together at many points, yet all of them added something of their own to the mix and delivered a very strong combined performance. One of the adaptation’s greatest successes is the way in which comedic elements are fused into the plot, something that many might view as too risqué when addressing such a theme. Though the accounts of the Holocaust are real, grim, and in no way trivial, the

decision to lighten the mood in a satirical way proves to be an appropriate one, as it offers a different perspective on the subject. There were moments of sheer hilarity, such as Brandon Gillespie’s fuming outbursts as Hitler during a roundtable intervention of the segment “I’m obsessed with the Holocaust”, Brenna Stewart’s translations of Yiddish into English (authenticated by her copy of “Yiddish for Dummies”), and the games like “Jews vs. Nazis” played by the children.

There are many cleverly-crafted references to pop culture, such as when Ben (Maric) suggests the Maple Leafs will go on to win 10 more Stanley Cups, or when he (Creswell) has a standoff with an SS officer (Jack Morton) à la The Good, The Bad, and the Ugly, that ends with the German officer exclaiming “Scheisse! That was fast,” as he falls to the ground. But of course, there were moments of extreme grief and mourning as well, such as when a newborn baby is shot by a German officer, or when Regina and her family give a particularly emotional account of their traumatic experiences in the concentration camps, and the indescribable liberation they felt when they were freed. They will always be reminded of the horrors they experienced by the serial numbers branded on their arms as a sign of their identity, yet the strength they acquire through supporting each other is enough for them to carry on.

Performances by Alison Blair, Alanna Boucher, Charlotte Cattell, Hannah Drew, Amelia Kurtz, Olivia Lloyd, Nicholas Marinelli, Michelle Nash, Amanda Piron, Eitan Shalmon, and Christopher White were all equally entertaining, sincere, and impressive; not only was the cast responsible for learning a number of Yiddish phrases in addition to their lines, but they mastered singing and dancing sequences as well that added another dimension to the performance.

Theatre Erindale’s adaptation of Eisenstein’s memoir is very inspirational, and above all, it stresses the importance of family in dealing with trauma and loss. Though only a child, Bernice is aware that even though she didn’t experience it, the Holocaust has affected her life and has made her into the person she has come to be. Such cataclysmic events like the Holocaust can never be forgotten no matter how hard one tries to escape the memories, but with the help of others, accepting the past is the first step in moving towards the future. A Child of Survivors runs November 16 to 20 at Theatre Erindale; for tickets, visit theatreerindale.com .