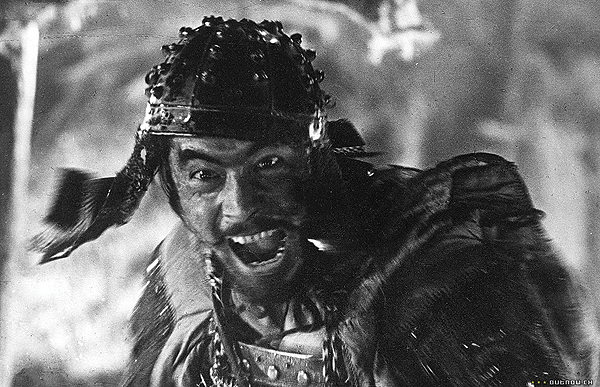 Anyone who made a Google search in the past few days will have noticed that on March 23, the Internet giant changed its standard cover image to a black and white display featuring a Japanese man wearing glasses and a driving cap. If you clicked on the image, the information that popped up informed you that the temporary logo was there to celebrate Akira Kurosawa’s hundredth birthday. But who is this man, and why should we care?
Akira Kurosawa is known as one of the most influential directors in modern cinema history. He worked from 1943 to 1993, producing classics as diverse as the metaphysical Rashomon to the famous adventure film Seven Samurai. He explored the use of multiple cameras and frame wipes—staple techniques of today’s cinema—and had an obsession for realism that bordered on criminal negligence. In Throne of Blood, a feudal Japanese remake of Macbeth, Kurosawa insisted that real arrows be shot at his starring actor to evoke a realistic reaction, and in his 1985 film Ran, he burned an entire castle set to the ground, since a constructed ruin just wouldn’t be the same.
Kurosawa’s cinematography and dedication for realistic acting deserves ovation to be sure, but his techniques aren’t the only reason he’s famous today. Have you heard of the Magnificent Seven? A Fistful of Dollars? Or perhaps a little film called Star Wars? They all drew from Kurosawa’s films—in this case, Seven Samurai, Yojimbo and the Hidden Fortress respectively. Kurosawa and his movies form an epicenter of cinema history—drawing from Shakespeare, American westerns and traditional Japanese theatre, and churning out classics that, in turn, became and continue to become the basis for new landmarks of commercial and critical success.
Even so, why should we watch the reruns of Rashomon and Seven Samurai on OMNI at midnight? If Kurosawa is so engrained into modern cinema, can’t we just appreciate his works by watching, say, Star Wars: Revenge of the Sith, and leave it at that?
Not so, and this explanation of his (arguably) most famous film, Seven Samurai, will show why.
Seven Samurai takes place in 1500’s Japan, in a state of nationwide warfare and political instability. The men at the top are losing power and the scum from the bottom are rising up to snatch it. Bandits ride across the land, stealing rice from peasants and brawling with each other for control over territory. The movie opens on a desolate plain. A gang of bandits ponder raiding a village for food and decide that they will ransack it once the barley is harvested. A villager overhears this and runs back to tell his town of the impending invasion. The villagers decide to hire masterless samurai to defend them, and their journey and the ensuing conflict of those seven samurai against the horde of bandits has everything you ever need to see. It has brawls, romance, even an exploration of morality and victimhood. But what’s important, and what makes it different from modern films, is that Seven Samurai doesn’t talk down to the audience.
Let me clarify. When I watched Avatar, I saw a simplistic metaphor for colonization and a vague attempt to endorse a lame spirituality around nature. When I watched the new Star Wars movies, I saw the Jedi go from Buddhist Monks crossed with medieval Knights to action heroes spouting pithy wit. When I watched Twilight… I didn’t watch Twilight, and good luck proving otherwise. What I didn’t see were movies where the characters are just as uncertain about their paths as the audience is. I didn’t see movies that left the audience to fill in the gaps with their own interpretations. I didn’t see movies unafraid of their audience’s IQ.
I’m not saying that special effects are bad. I’m not saying that action scenes are bad either. Neither am I saying that Kurosawa’s movies spout truth, but his movies do accomplish something better with the magic of optics and with skilled actors than just make them explode each other. Kurosawa believed that movies can entertain and engage viewers, and that’s why you should watch his films.
Plus, you know, swordfights and samurai. That’s awesome.