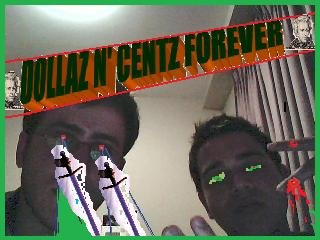 Generally, substance abuse does not impress me. Not that I disapprove of it or anything, Im just not impressed by it.

When rappers rhyme about getting crunk, or what have you, I equate it with a frat boy bragging about how many beers he drank last night. Snoop Dogg gets away with it because hes always high. Its a part of him that only adds to the whole Snoop experience. No one ever goes to a Snoop show, realizes hes high and is concerned about the effect it may have on the music. Snoop is supposed to be high.

Very few performers are able to find that balance between their drug habits and their music. In general, one hinders the other. In some cases it destroys the musician entirely. But sometimes a drug can enable an artist to create something they could not have otherwise. Whether through inspiration or removal of certain inhibitions, the drug becomes integral to the creative process.

Having said all that, The Naggerzs five song EP, Dollaz N Centz, probably wouldnt have come to be if it werent for this phenomena.

Paul Pauley Dollaz Castrodale and Mike Mikey Centz Di Leo deliver 23 minutes of homemade hip-hop, rhyming about six-digit incomes, hoes, and cognac. Though Hurley t-shirts and McDonalds in my Honda civic might be more true to life than ice on my neck and Cristal in my jet, with lines like I put the beast in bistro I wont knock them for it. Mike and Paul show off their various bling, including a gold plated psp.

The song Richard Monkeys Cheese Museum, despite a title that sounds like a Weird Al album from 1992, is a favourite. Its got NWA-like beats, juxtaposed with two of the most innocuous rappers ever performing over it. The real charm of the song is the candid conversation its peppered with. At one point Castrodale confides in Di Leo that they may have just recorded the best rap song ever.

After Ice On My Neck, 2 Emceez, and Wassup Hoes, — the content of each song pretty much self-explanatory — the album degrades into a nine-minute, long freestyle called Keep it Real. The song is mostly about the same stuff as the other songs, apart from a 36-second chunk where the MCs repeat the line Young Hov in the house, its so necessary.

If I had one wish, it would be that the duo get it together and perform live, or at least figure out how to use auto-tune in GarageBand and start making Kanye songs.

The lyrics are crass, the recording of a low quality, and just how much Glen Levitz and pot were involved in the mixing process is dubious, but this is one of the more interesting rap albums Ive heard this year. If you cant respect that your whole perspective is whack, maybe youll love them when they fade to black.