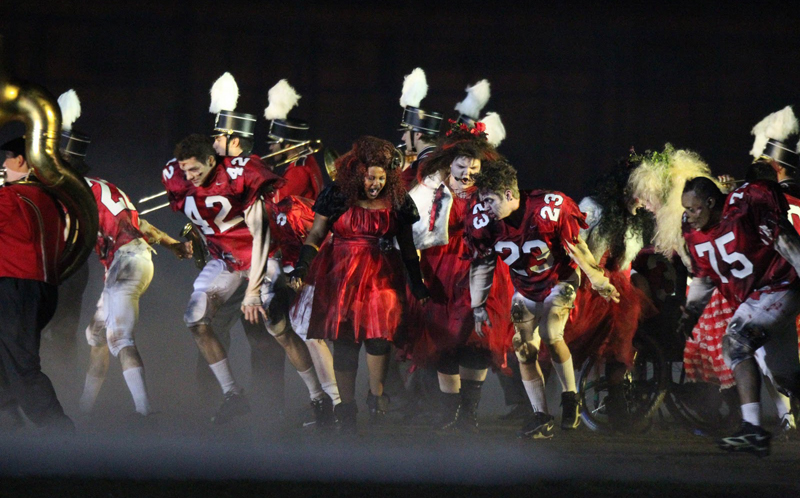 Glee returned on Super Bowl Sunday to resume the second season of the hit TV-show musical. They did their own take on the football event of the year, calling the episode “The Sue Sylvester Bowl Shuffle” and making it part of the series rather than a standalone special episode. The episode featured a mash-up of Michael Jackson’s “Thriller” and Yeah Yeah Yeah’s “Heads Will Roll”; toss in extensive zombie costumes and makeup (that probably no high school production would be able to create) along with crazy choreography and perfect sound, and you’ve got another Glee hit. It also featured songs by Katy Perry, Lady Antebellum, Destiny’s Child, and The Black Eyed Peas.

Sue Sylvester is back in all her insanity in this episode, hoping to

convince the dimwitted cheerleader, Brittany, to be shot out of a cannon as part of the Cheerios’ performance for nationals—which happens to be taking place at the same time as New Directions’ big halftime show for the football championship, thanks to some clever manoeuvring on Sue’s part. The Cheerios must choose between Glee Club or popularity, a common theme in many of the episodes. This episode features more of the football team, as the guys gear up to dance along with New Directions in an attempt to blur the line between football and dancing. It’s a classic Glee storyline, with a surprise kiss and a typical ending to leave all the characters in high spirits. The episode pulled in 26 million viewers and didn’t disappoint the Gleeks who watched it.

Glee followed this episode with a Valentine’s Day special last Tuesday night (their regular slot) called “Silly Love Songs”, featuring the relationships between all the characters as they serenaded in love songs. Kurt got a dominant role in this episode, still lusting after his friend Blaine, who plans to woo someone through song for Valentine’s Day. Finn sets up a kissing booth in order to get a certain blonde to kiss him, and Santana actually gets to wear normal clothes and have lines that are more than just sarcastic remarks. Rachel realizes she’s still pining over Finn, and expresses this as she sings a strong rendition of Katy Perry’s “Firework”. Puck now has eye set on a new girl—the heavyset, tough new member of New Directions, who isn’t falling for his usual tricks. This episode delves even more into the characters themselves and the bonds between them, focussing more on the dialogue than the songs. It also gets across the classic message that just because you’re alone, it doesn’t mean you have to be lonely. But did anyone else notice that Sue Sylvester had no lines in this episode? Maybe Valentine’s Day is just too much about love to incorporate her pursed lips and witty remarks about Will’s hair.

On the next episode, showing on February 15 and called “Comeback”, expect to see the return of Emma, Sam singing Justin Bieber (and maybe being recruited into the Cheerios by Sue?), and the possibility of Sue joining New Directions. The second season started out rough, with uninspired plots that left viewers bored, but it seemed to be coming back after the first few episodes and will hopefully keep it up as the season continues.

In other Glee news, the cast is returning on another tour, starting in May 2011. They’re touring again to thank all the viewers that have made Glee a hit, having enjoyed the energy from all the fans in the last tour. The dates go from May to June, hitting a few states in the US before their final stop in Toronto on June 11. Get your tickets soon if you want to see a Glee performance that isn’t on the flat screen!