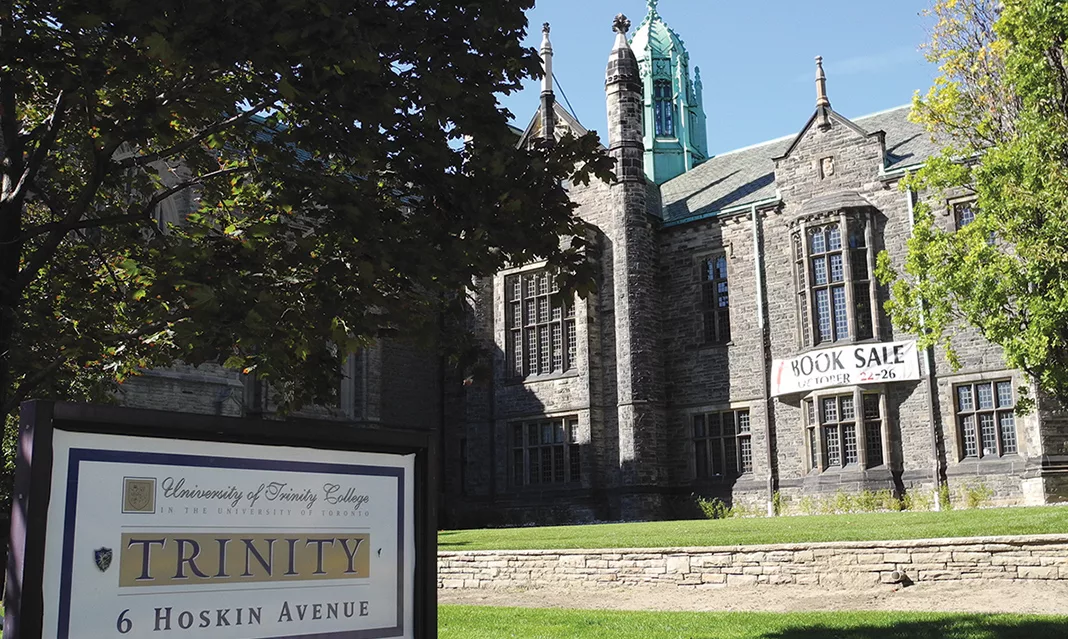 Art is shaped by our personal histories. Art is collectively defined. Art is for advancing the artist’s worldview. Art can be so many things and art can make quite the statement.

The 2019 rendition of the Trinity Art Show takes place this weekend, and it is all about statements. The focus is on issues in society, grappling with contemporary manifestations of racism and gender, and everything in between. With artwork by ten artists across the University of Toronto and two interactive installations, the show hopes to serve as a springboard for meaningful discussions.

Read about the four U of T Mississauga students whose artwork is featured in the show this year:

Jasaña Alleyne is a mature student at UTM in her penultimate year in the Art and Art History joint program with Sheridan. Alleyne says, “I think it’s a very powerful theme,” noting the importance of statement-making art. Her painting, Madonna Lactans, subverts the historic dominance of white Renaissance artists and the priority given to white subjects. Alleyne wants to change the depiction of Black figures—when they appear in Renaissance-era art, they are typically subordinated as slaves and relegated to the background.

Alleyne notes that Black artists did exist in the Renaissance, but their art has not seen the spotlight and is often omitted from art history education. Her Black Madonna and child painting are a step in changing the current view of these paintings, and it is the first of her Renaissance reimagined series.

“I’m hoping that it does induce some kind of uncomfortability, so we can talk about it,” says Alleyne. Racism and representation are brought to the forefront in this piece. “If it’s in your face, you can’t ignore it,” she says.

Maryam Radwan (artist name: Mariam Radwan) has created a series of photos entitled Silk the Man, that questions concepts of gender identity, especially the idea of manhood and its portrayal in society. Elements of softness often linked to femininity are used in this photo series, with the focal point being a man eating a cake, which Radwan says refers to sexuality.

Radwan is a student in the joint UTM/Sheridan program studying Communications, Culture, Information and Technology as well as Art and Art History. She is interested in exploring the harms caused by boundaries in society, as well as female identity and empowerment. Radwan is also the co-president of Creatives for A Change, an organization on campus that provides opportunities for students to make a difference in the world and meet creative professionals involved in making social change.

James Legaspi, also a student specializing in Art and Art History in the joint UTM/Sheridan program, has recently self-published a book of found art and found text, entitled Red on Top, on display at the exhibition. He is all about making statements with art, but says, “I don’t think I’m really an artist. I make things and people call it art.” Legaspi doesn’t believe in making “big hunks of art for people to applaud.”

Also on display is Legaspi’s short video entitled Landscape Painting, where white paint is applied to snow, humorously jabbing at the practice of landscape painting while also addressing the practice of whitewashing and white worship. Both the book and the video engage the marginalized East and Southeast Asian experience in North America, informed by his own Filipino cultural identity, and confront issues faced by people of colour.

Kay Rose studies biology and psychology at UTM and has also taken some studio courses at Sheridan. Although hesitant to label her work as “feminist,” Rose says that her works aim to subvert the traditional portrayal of meek and docile women in classical paintings. Rose’s work takes an “aggressive approach” in contrasting softer elements with threatening ones, including spiky nails and sharp blades—see, but do not touch.

One of these pieces, Armour, a reimagined suit of armour, is made of nail-studded mesh, laced up with red ribbon. The regal woman portrayed in Rose’s painting Indignation is literally sharpening a blade. Rose, however, did not want to explain much more, saying that “art means different things to different people and speaks for itself.”

See the art for yourself, at the historic Seeley Hall at Trinity College on the downtown campus. The show kicks off with an opening reception on March 29 at 6pm, with snacks, sparkling beverages and original beats arranged by Elias Williams, providing a special soundscape for this year’s show. The exhibition will also be open for viewing on March 30 through 31st.