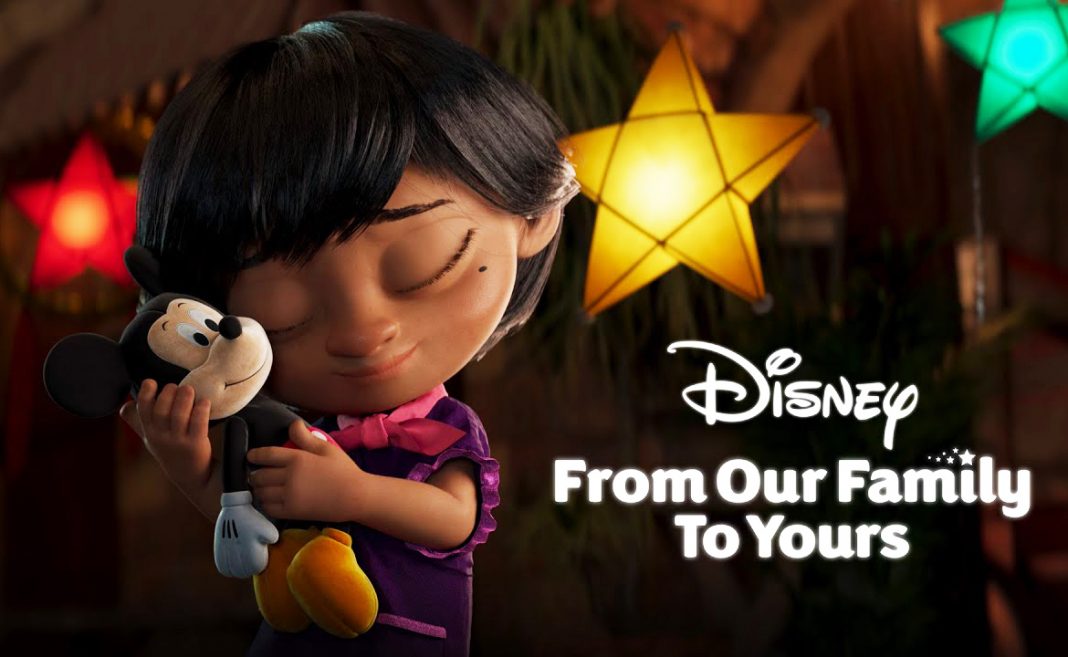 Every Christmas season, the floodgates of holiday movies and specials open. Being wrapped in a blanket, hot chocolate in hand, re-watching your favourite holiday flicks seems like the epitome of Christmas coziness. But nestled between all those seasonal rom-coms and Christmas classics is a three-minute treasure—Disney’s animated short From Our Family to Yours.

For their 2020 Christmas advertisement, which also celebrates its 40-year partnership with Make-A-Wish Foundation, Disney released an animated short that celebrates family and tradition through the lens of Filipino culture. The story is a touching display of the relationship between a granddaughter and her grandmother, connected by their yearly cultural traditions and the grandmother’s childhood Mickey Mouse plush toy. From the Philippines in 1940 to presumably a new country in 2005, we see Mickey Mouse get passed down from generation to generation, becoming a symbol of love, culture, and nostalgia.

When From Our Family to Yours released in early November, people overwhelmingly praised the animated short for how deeply it resonated with them, especially concerning Filipino culture. It portrayed cultural touchstones such as Simbang Gabi, a nine-day series of church masses in the Philippines leading up to Christmas. Mano Po also appeared, a gesture of respect toward elders, in which you bow to the elder’s hand and press it against your forehead. Parols—or star-shaped lanterns—were another beautiful addition.

From the charming character designs to even calling the grandmother Lola, the little details made it special to Filipinos everywhere. The short’s massive praise from all audiences—Filipino or otherwise—only continues to prove the importance of diversity and representation within media.

“The short is such a great reflection of the bonds between families. We all have unique traditions, especially at Christmas, so being able to draw on my own experience with my Filipina grandmother and bring a level of authentic creativity is pretty special,” said Angela Affinita, Disney’s Director of Brand and Creative Marketing for EMEA, to The Drum.

While focusing on details, Disney also left some hidden “Easter eggs” to find within the animated short. A clip of Once Upon a Snowman, another upcoming short, can be spotted on the family’s TV. Other hidden references included a snow globe of Disneyland Paris, DVD collections of Star Wars and Marvel, and National Geographic magazines. And of course, with Disney, there’s bound to be a few Mickeys hiding around the house.

The bond between Lola and Apo, grandmother and granddaughter, already had viewers feeling sentimental, but the music only intensified such emotions. The main track is a single by Griff titled “Love Is A Compass.” Its moving lyrics and melodies flow with the story, evoking hope and love to maximum effect. For Disney’s partnership with Make-A-Wish Foundation, proceeds made from Griff’s single and from sales of the featured Mickey Mouse plush toy will be donated to the children’s charity, along with $1 (up to $100,000) for each festive memory shared with the hashtag #LoveFromDisney on social media.

While Disney’s From Our Family to Yours focused on Filipino culture, its themes of family and tradition are universal. There’s no dialogue in the story which, as Affinita says, “helps resonate across Europe regardless of the local language.” This style allows more people to connect with the story, while still representing the Filipino community in a meaningful way. During the pandemic, there couldn’t be a better time for such an uplifting story, one to remind us of our loved ones and the traditions we cherish during the holiday season.