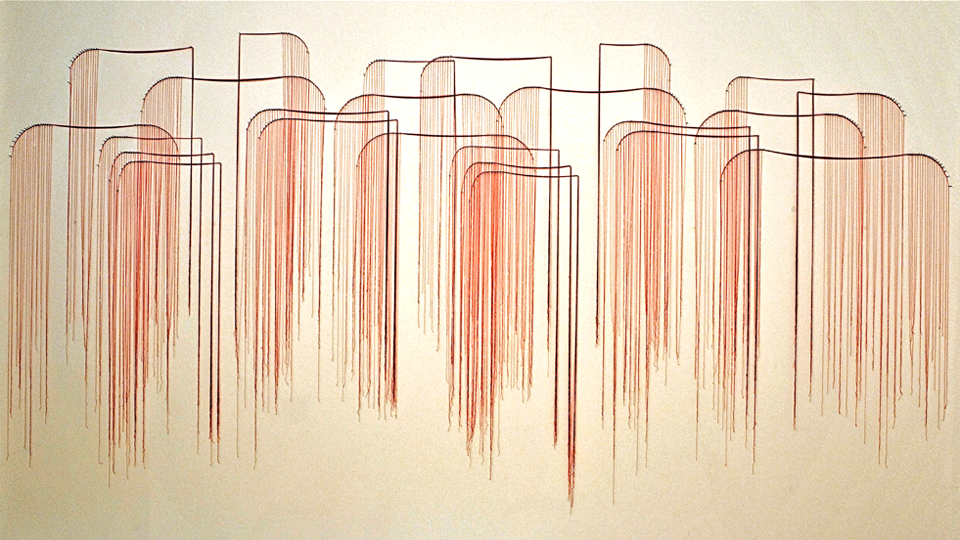 I admit that fibre art is not something I’m well-versed in. Perhaps because of my ignorance of the medium—which actually seems pretty widespread among the general population—I found the Art Gallery of Mississauga’s exhibit F’d Up! even more engaging and weirdly magical than I would have otherwise. Until this show, I’d never thought about fibre (more commonly known as the stuff clothing is made of) as art. I knew that art can be anything, but I didn’t know that “anything” included fabric.

The theme of F’d Up! is social injustice, which is intriguing right from the start. “The artist who works with string, yarn, or fabric is often equated with the backroom politics of the moniker ‘women’s work’, a gender-based derogatory term that precludes the possibility of male artists working with fibre,” explains the program placed in my hand as I enter the show’s opening reception. Even so, I find myself drawn to the large number of female artists listed. While it’s true that men working in fibre art can break gender barriers, the fact that women are working with string and fabric out of their traditional context is perhaps the most powerful statement F’d Up! can make.

Visually, the gallery is chaotic. Colour and shape burst everywhere, and take no time to get in the viewer’s face. The first piece to grab my attention is just inside the door, a centrepiece almost like a fountain or statue. In this case, though, the sculpture lives, which takes a surprisingly long time to detect. A young woman stands completely still, wearing only a misshapen fatsuit that is skin-coloured from shoulder to waist and fades to light blue at the feet. She breathes and blinks and that’s all. As a piece of performance art, she’s remarkable. All I can think of is the discipline and patience it must take to stand there for so long, and how difficult it must be to listen to people talk about you and not be able to react. She’s effective; I’m pulled right in and I want to know what else the show has to offer, once I’ve gotten over the shivers the piece induces.

The sculptures in F’d Up! are especially engaging because they’re not confined to pedestals with nameplates beneath them. My favourite piece is a wall-like installation of string, rope, and knots that invites the viewer to experiment and explore. Partly because of its size—it towers over a person and stretches wall-to-wall twice—this piece at first seems restrictive, but quickly becomes an occasion of discovery. The details within the larger web structure are almost mesmerizing, and the artist obviously has an extensive knowledge of knots. The shadow cast on the back wall is also incredibly beautiful, despite being cast by something made of only a few knots in a huge spider web.

F’d Up! is aptly named. Every time I turned a corner I thought, “What the f***?”, which was a positive reaction in that I was immediately and consistently curious. However, since the pieces themselves seemed to have no apparent connection to the provocative mandate, I was a little confused as to the precise point. The art itself was visually compelling, but evoked little intellectual response beyond the initial “What?” factor. I was also disappointed to see so few people at the opening; like numerous events both on campus and off, the attendance was, to put it frankly, puny.

F’d Up! remains an intriguing experiment that is definitely worth viewing, if only as an introduction to the world of fibre art. F’d Up! runs at the Art Gallery of Mississauga until November 9.