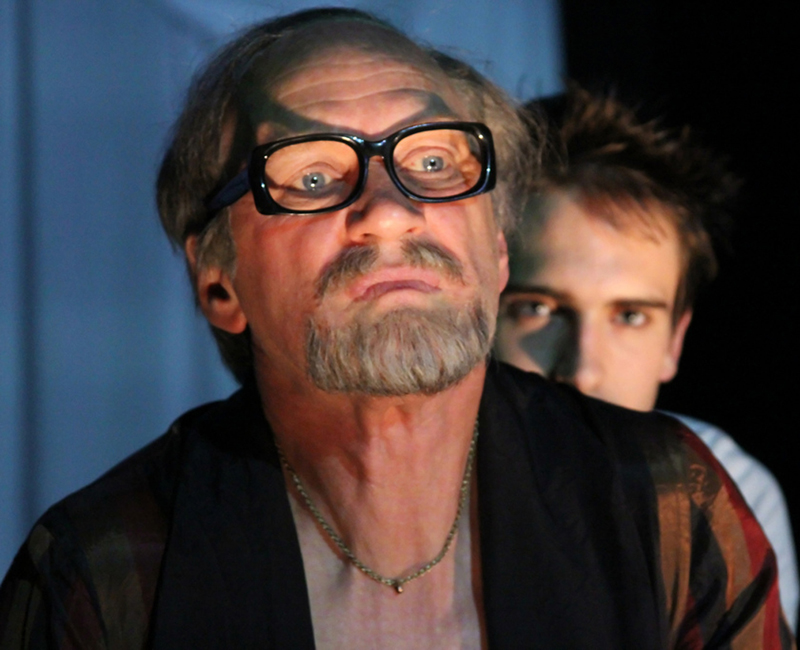 Tennessee Williams. Whatever sensations or associations that name evokes, few can deny its dominating presence in the pantheon of theatre and drama. His many plays are a canvas on which the hues of human passion are displayed. Indeed, Hart House Theatre’s original production, The Gentleman Caller, has the troubled writer remark: “I’m a  student of human nature.”

Written by James Cunningham and Martin Hunter, The Gentleman Caller (which had a run of only a week) explores what was going on internally as the  external world of Tennessee  Williams began to dissolve. The underlying question is investigated, director David Ferry writes, “as if it were part memory play, part dream play, and part hallucination”. In the short time the play runs, each of these elements is clearly marked and blended to great effect.

The Hustler (Harrison Thomas) arrives at the suite in the Elysée Hotel, where Tennessee Williams (Nigel Bennett) is drinking, reflecting, and  writing. Similarly to The Glass Menagerie, from whose lines this play’s title was drawn, the arrival of the gentleman caller is the catalyst for re-examining a past steeped in drugs,  alcohol, and sex. It is a past that recounts the familial relationships with his mother, Miss  Edwina (Allegra Fulton), and his sister Rose (Carmen Grant).

Here is where I plead ignorance. There was a certain appeal in going to a play completely (or perhaps relatively) blind. Aside from recognizing the name and its connection to classics such as A Streetcar Named Desire, The Glass Menagerie, and Cat on a Hot Tin Roof, I had no knowledge of Tennessee Williams. It may have been a bad idea. I undoubtedly missed many references, as  evidenced by my conspicuous silence during the occasional widespread laughter and snickering. It is a play that seems to have been aimed at fans of the playwright, people who have been moved by the lucid and compelling characters he created.

Nevertheless, the production itself was enjoyable. Black and white images of the young Williams and scenes from film adaptations of his plays are displayed sporadically throughout and are visually engaging. The seemingly incestuous relationship between Williams and his sister is oddly captivating and strangely  moving. The back-and-forth, up-and-down relationship with his mother appears to have captured the essence of their real relationship, which was confirmed after the show through discussion with audience members.

Nigel Bennett captures the depths of anguish that plagued Williams as he sought to dull it through debauchery, and the role will get all the critical attention. However, it was Carmen Grant as the unfortunate sister who stood out as she effectively navigated a fine line between lyricism and lunacy.

It’s a short production, but it is just long enough for you to glimpse the depth of pain and suffering that haunted Williams and the strange passion that moved him to revisit and explore it. If you are a fan, it may provide some fresh insights into the iconic figure. If not, you may be unable to follow along, but the story is engaging, the images visceral, and the acting compelling. You just might learn something about the human  experience.