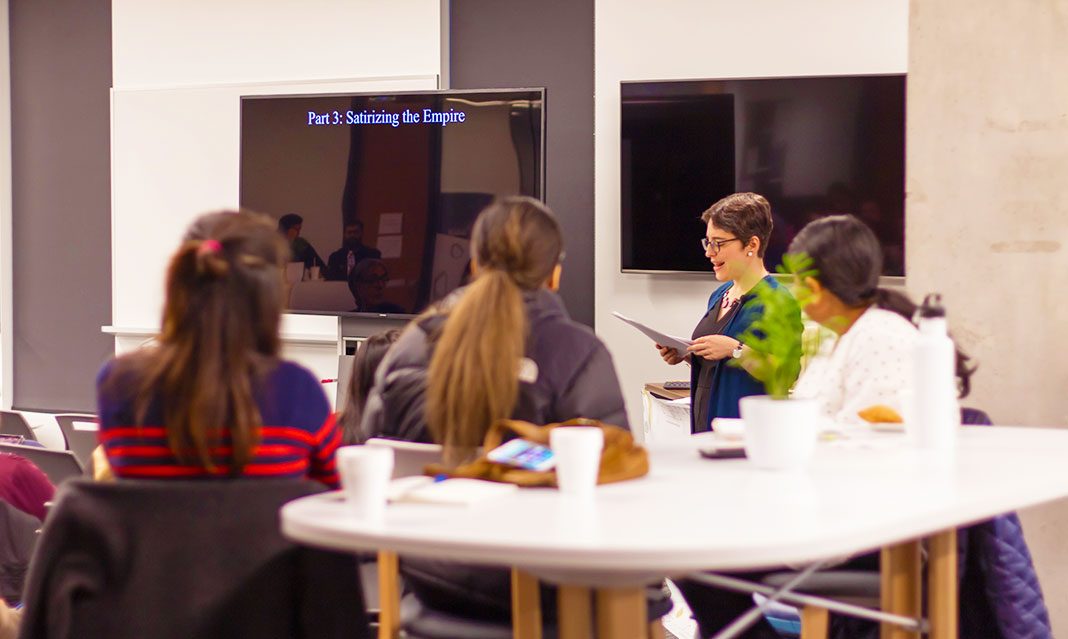 Jennifer Dubrow, an associate professor in the Department of South Asian Civilizations at University of Washington, came to UTM last Monday to talk about her first book, Cosmopolitan Dreams: The Making of Modern Urdu Literary Culture in Colonial South Asia. The book is a major contribution to the study of literary culture. Her research and teaching focuses on Hindi and Urdu literary modernisms in post-independence India and Pakistan, print culture and history of books in South Asia, and South Asian modernisms.

In her talk, Dubrow discussed Cosmopolitan Dreams and how the arrival of print fostered a dynamic and interactive literary culture. Her book traces the emergence of a dynamic and interactive Urdu print culture in late nineteenth century South Asia and explores how literature became a sight in which modern day life can be lampooned, debated, and critiqued. Cosmopolitan Dreams reveals the cosmopolitan world of Urdu literary culture in the late nineteenth century arguing against current understandings of Urdu as an exclusively Muslim language.

A central concern of the book is the ways that print helped to create an Urdu cosmopolis in late nineteenth century South Asia. According to Dubrow, cosmopolis is used to indicate how Urdu readers and writers imagine themselves as citizens of an Urdu speaking transregional yet nonnational community that was global and outlooked and consciously resisted national borders for religious identities. “The Urdu cosmopolis was threatened to be fragmented in the late nineteenth century as Urdu and Hindi were redefined along religious lines,” claimed Dubrow.

Dubrow’s talk was divided into four parts: waiting for the postman, the Urdu cosmopolis, satirizing the empire, and how we take dramas seriously. Among these, she also discussed the tale of Azad or commonly known as “Fasana-e Azad” by Sarshar as an example of the Urdu cosmopolis. One of the characters in this tale was named ‘Azad,’ which meant freedom. Overall, the talk was educational and informative, and the audience seemed to be very engaged with what Dubrow had to say.

Dubrow concluded the talk with a compelling speech, discussing the purpose of Cosmopolitan Dreams and how it presents South Asian concerns in the literary world, from a historic and a modern point of view, and its transition from localization to globalization throughout the past decade.