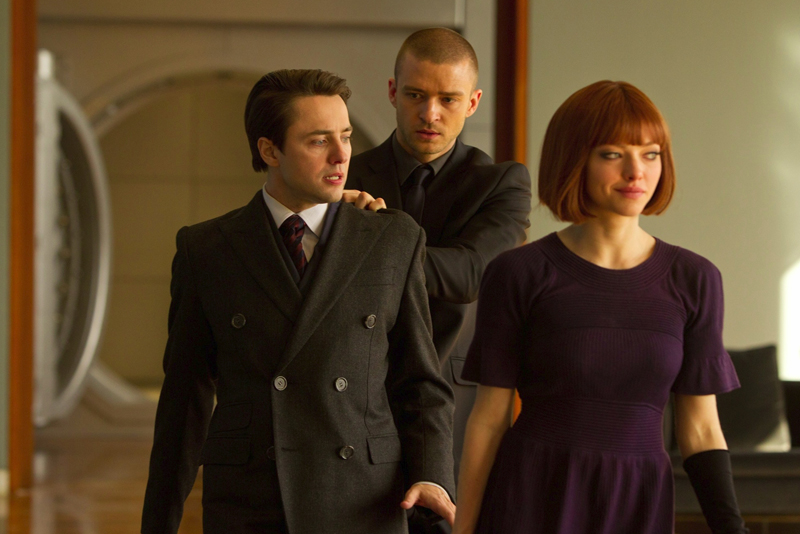 In the universe of Andrew Niccol’s In Time, time is money. Literally. In the distant future, time has replaced money as the major unit of currency. In this world, people stop growing old at the age of 25 and are only given one additional year to stay alive, unless they can earn more time on their own accord. This can range from working in a factory, earning back your time through laborious, back-breaking work, or by taking extreme, even illegal measures to make sure the clock—that is, the green LCD countdown embedded in your arm—keeps on ticking. When it stops, so do you.

For characters like Will Salas (played by the surprisingly decent Justin Timberlake), staying alive is a daily struggle. But when Timberlake’s character meets Henry (Matt Bomer), who has more than a century on his clock but is tired of living forever, Henry bequeaths his years of time to Will. This  results in all the wrong types of men pursuing Salas, our blue-collar protagonist, in order to make sure his recent windfall of time isn’t used recklessly.

Niccol’s intention is to create a thought-provoking science fiction flick, yet In Time seems more like an action-oriented game of cat and mouse, having Will and rich girl Sylvia Weis (played by Amanda Seyfried sporting a ludicrous red bobbed wig) running away from men who are obviously not too happy with Will’s recent inheritance of time.

While Niccol tries hard to use the premise to create a commentary on our obsession with the value of time, In Time asks its audience to suspend their beliefs a little too much. In the movie, the aging gene is “shut off”, and in order to control the population time is made the ultimate commodity. But how on earth did we get to the point where currency has evolved from its current form of bills and credit cards to a countdown clock in one’s arm? While one never expects perfect realism in science fiction, it seems not only unnecessary but quite unwarranted to replace an economic system that’s been working adequately, if not perfectly, for many centuries.

In one scene, a character participates in a high-risk poker game, choosing to scare his opponent into folding by betting all this time—that is, betting his entire life. It’s one thing to bet your entire savings—a crazy and reckless move that many people do in our own society now—but to bet your entire existence as if it were normal? It’s a risk most people wouldn’t take.

And it’s not just the poker game. In Time illustrates its premise through the cup of coffee Will sacrifices four minutes of his time to buy and through the prostitute willing to give you 10 minutes of her time for an hour of yours. While the concept Niccol builds with this idea is clever and intriguing, in the end, it can be compared to chopping off a millimetre of your finger each time you order a tall caramel macchiato from Starbucks: no sane person would ever do it.

And that’s the major problem with Niccol’s movie. With his premise, Niccol establishes the characters as people who would welcome this drastic and risky economic change. And with the obvious unhappiness of Salas, his mom (played by an attractive yet eye-roll-inducing Olivia Wilde), and the other working class characters that occupy the slums of In Time’s world, one has to wonder why they’ve let this change evolve to the point it’s gotten to, where clearly no one is happy. It’s an action-packed, adrenaline-bursting film that will  entertain moviegoers looking for a good time and wanting to see attractive leads, but In Time allows itself to be the victim of clever time-related puns by having a half-backed  concept and a floppy execution. Save your money. Save your time.