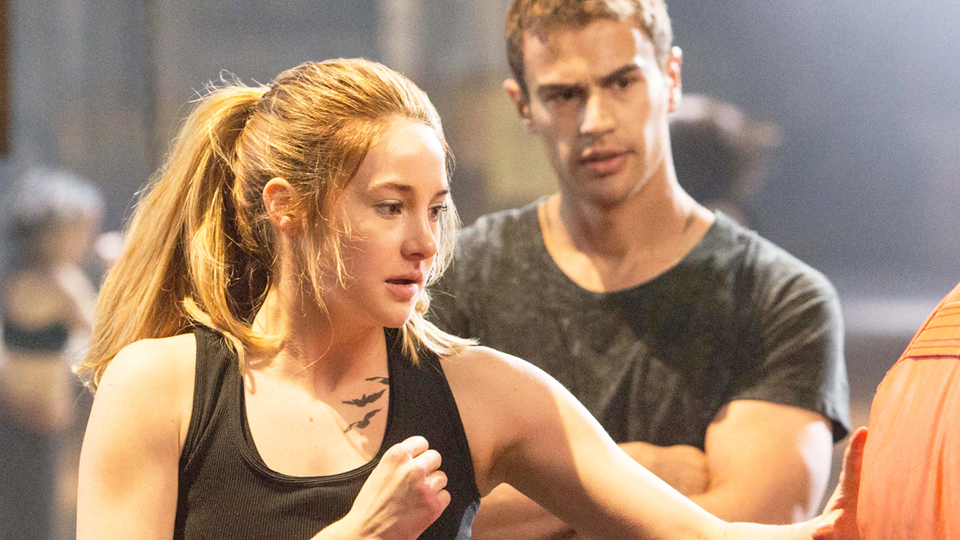 The problem with Divergent is that it’s The Hunger Games all over again, but with less fire. Dystopian fiction is a difficult genre because it requires so much exposition. Divergent takes care of most of this off the top by means of voiceover accompanied by beautiful wide shots that really put us in the world of the characters. We learn about the five factions of society to which all citizens must belong. You get to pick your faction, but if you don’t pass the training you become one of the “factionless”— the people who live as homeless squatters on the fringes of society. Not unlike the Seam from The Hunger Games, I thought. At the beginning of the film, Tris (Shailene Woodley) is about to choose her faction and possibly have to leave her family because of it. “Faction before blood” is the maxim that makes this society work, and everyone must obey.

Those who read the book will find the adaptation faithful to the source material. For instance, Dauntless’ headquarters looks exactly like they did in my head, as do each faction’s costumes. What I found, though, is that all the things that barely worked in the book don’t fly at all in the film. Tris really doesn’t get interesting until the final half-hour of the film when there’s a lot of gunplay and hardly any dialogue. As I recall, Katniss from The Hunger Games was a badass from the moment she realized she could actually win the games. Like Katniss, Tris is willing to make sacrifices, but I didn’t believe she would actually fight for what she wanted until the end. Similarly, Kate Winslet plays the antagonist Janine Matthews, but even she’s a one-trick villain.

Partway through the film, Tris makes a choice that pushes her to her limits physically and mentally, and she ends up in a dangerous situation when she’s told that she’s divergent—she doesn’t belong in just one faction. This is a problem because one of the factions is systematically destroying divergents while trying to take over the government. Basically, the corrupted government is out to kill the protagonist. Sound familiar?

Something I really admired in The Hunger Games was that Katniss is not an anorexic, baby doll Hollywood type. Jennifer Lawrence is strong, not glamorous, and I think we need a little more of that in our movies. Both Woodley and her leading man, Theo James (who plays Four), are too good-looking to make the oddball, misfit characters they portray believable.

Divergent asks some good questions about finding your identity and the sacrifices people make (or don’t)for those they’re loyal to. How selfless can you be without losing your own sense of purpose? And how do you stay true to yourself throughout all that? MM½