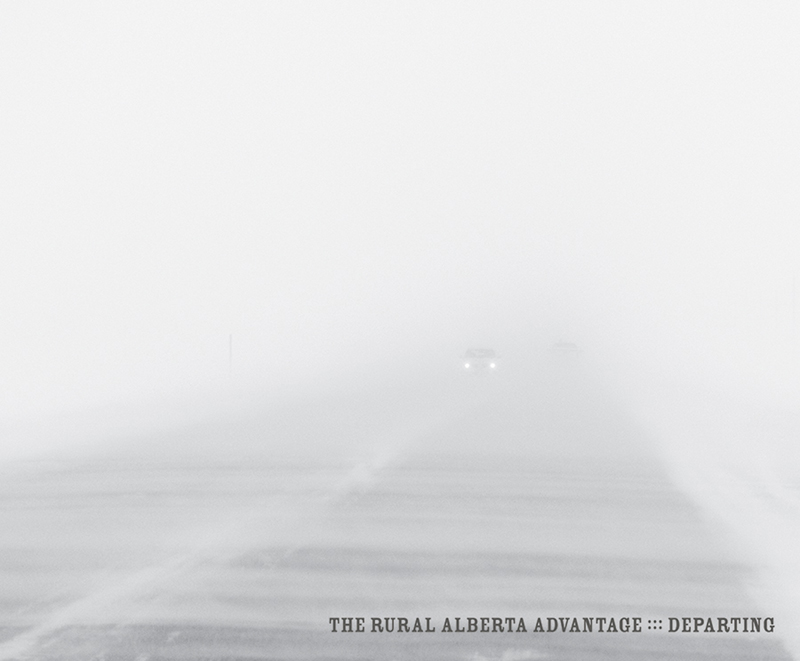 Toronto trio The Rural Alberta Advantage has earned buzz from bloggers and critics thanks to a pair of EPs and their 2008 full-length debut album, Hometowns. But now, on their followup record, Departing, they prove that they’re not one of the many bands who crumble under the pressure of creating a followup to a hyped debut album.

Their sound is distinctive, with their jittery, fuzzed-up style that they add to each song. And while this hook occasionally threatens to make all their songs sound alike, they dabble in a wide enough array of genres and tempos to keep Departing interesting from song to song.

One of the best songs on the album is “Muscle Relaxants”, in which the band flexes their rock ’n’ roll muscles and crafts a propulsive upbeat track with a great hook for a chorus. In fact, many of the album’s highlights are the more lively offerings. Singer Nils Edenloff ’s voice has an effectively gritty, strained quality which lends itself nicely to up-tempo songs. “Stamp” is another garage rock gem that will likely please fans of their older songs, such as “Drain the Blood”.

As for the album’s more low-key offerings, “Coldest Days” shows a softer side to The Rural Alberta Advantage; the vocals and guitars adapt easily to the quieter songs, and this diversity gives the album some much-needed dynamics. As well, “North Star” is a sparse piano ballad of sorts, done over in the band’s uncompromisingly unique style.

Sharp drumming from Paul Banwatt also adds considerably to the band’s signature sound. The unrelenting drums not only propel the songs along but also make for great contrast when the rhythm section suddenly disappears. Interwoven with jaunty keyboard and distorted guitars, the drums only enhance the deceptively simple instrumentation on Departing.

The Rural Alberta Advantage knows how to give their music an almost atonal quality at times. Guitars endlessly play single notes, and Edenloff ’s vocals are sometimes nasal and discordant, but all of this is of course constructed. The band expertly combines this unrelenting clash of sound with the sweet, unassuming melodies that sneak up on the listener. These may not be pop songs that get played on the radio, but a couple of the choruses here are likely to get stuck in your head for days.

Their lo-fi style may be popular, but The Rural Alberta Advantage brings little of the sneering detachment of artists who fit into that genre (such as Wavves and  Japandroids). They also offer more of a folk edge to their music, making them similar to fellow Canadian acts Wintersleep and The Weakerthans. At times (such as on “Stamp”), they even sound like a more minimalistic Broken Social Scene. Perhaps it’s a distinctly Canadian sound, but it’s one that often seems to appeal to indie music fans worldwide.