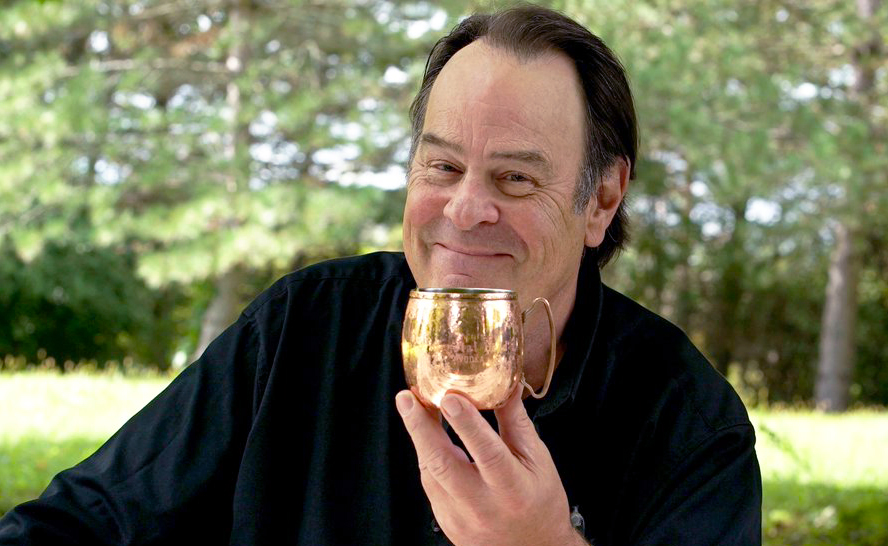 With tales of his great-grandfather, Samuel Augustus Aykroyd, and his connections with the afterlife having passed through familial interests, Canadian funnyman Dan Aykroyd’s penchant for the paranormal was no accident. Rather, it was a precursor for a transcendent screenplay, inspiring waves of future ghosthunters to muse into the unknown and frolic among obscurity.

In an exclusive interview with The Medium’s Associate A&E Editor, Paige France, Aykroyd recounts his experience with Spiritualism, his view on individuality and acceptance, and the importance behind Ghostbusters’ continual ability to educate and enthral curious minds.

Throughout Aykroyd’s prolific career, his self-image pervades his creative dexterity. The now 68-year-old Ghostbuster confides that challenging the norm was an integral personal conquest. With Coneheads (1993), Aykroyd identifies with his character Beldar’s eccentric ideology.

“Oh yeah, the Coneheads. Beldar is an alien, and I feel alienated sometimes. I am an observer. He wants to help, and he’s fitting into a harsh society to get ahead, ultimately becoming a member of an enriching community,” says Aykroyd.

“Playing an alien, is right up my alley. Not the alienation by virtue of my Hollywood career. The way I was born was just a little outside the norm. I have a view of the world that is certainly not normal. Maybe I have a little aberration that has helped me creatively.”

His outsider status has profoundly influenced his screenwriting, whether in his dreams of acceptance, or refusal to conform in the face of fear. Remaining unmalleable has allowed this heterochromatic comedian with syndactyly (Aykroyd has opposite coloured eyes and webbed feet) to introduce the world to authentic character portrayals.

With his prominence on the big screen, Aykroyd’s creative eccentricity has helped spawn a sense of timelessness between him, his contemporaries, and generations of audiences. Films with enduring power sparked his trailblazing work, pulling the white cloth off of his family’s research for curious onlookers to see.

The paranormal sensation—Ghostbusters (1984) and Ghostbusters II (1989)—was conceived and co-written by Aykroyd from an evolving childhood fascination. Aykroyd credits his father, Peter Aykroyd’s book, A History of Ghosts: The True Story of Séances, Mediums, Ghosts, and Ghostbusters, for influencing him. It’s a comprehensive history of ghost sightings and the Spiritualist movement that swept through the United States. The literature details his family’s passion pioneered from bequeathed tradition, uniting “real empiricists chasing ghosts” alike, and shedding light into the Aykroyd household and those early experiences from which Ghostbusters originated.

“My great-grandfather was a long-time Spiritualist. For séances on Sunday, black cars would arrive, and matrons would sit around the table.” Believing that the religion is as valid as any other, Aykroyd’s family was part of a community that believed life does not end.

“Consciousness survives after death and can be contacted from this world to the next. My family grew up in a legacy. My great-grandfather researched these unexplainable acts. He had his own séance room with a family medium. This is what his family was steeped in. Our family business was a belief in the afterlife and the release of the consciousness.”

Raised in a household where the dead were celebrated, Aykroyd found himself years later perusing the pages of the American Society for Psychical Research journals he had grown up reading. Fascinated by quantum physics and comparative psychology, Aykroyd envisioned a concept where the parapsychological vernacular was combined with comedy.

“Would it not be innovative to make an Abbott and Costello-Bing Crosby-Bob Hope-Bowery Boys-type ghost comedy of scientists who are trying to help a society where nobody believes in the paranormal?”

Intertwining the science of how apparitions might manifest in the real world with lighthearted commentary, the screenplay introduced a predominantly unbeknownst element—“ectoplasm.” Despite its 1894 discovery by French physiologist, Charles Richet, Aykroyd integrated the tangible science of ectoplasm, hence, co-star Bill Murray’s iconic line: “He slimed me.”

“It was the perfect marriage of talent and science,” says Aykroyd. “We were working on all 16 cylinders.”

“It is the true nature of the paranormal. We can’t explain it, and that’s the reason I chose to integrate science with the backdrop of disbelievers in the heart of New York.”

“Spirituality is more than the survival of consciousness. I like it because of the notion of hope that it elicits. It is a gentle religion that’s so wonderfully tolerant. To be a Spiritualist means to inherit a legacy that’s tolerant of love, kindness, and equality. Spiritualists of Louisville, New York was a very strong feminine community that supported the suffragettes, underground railways, and encouraged same gender preference couples,” says Aykroyd.

“I feel honoured to be a part of this wonderfully tolerant religion. It is woke. Being a member of a woke culture that explores the inexplicable—there’s something beautiful about that.”

The association of hope and death brings joy to Aykroyd. “With the magic of the religion using the backdrop of Louisville, all available on a summer’s night and the magic of the woods—surrounded by the paranormal entities of your belief—who would want to leave? This is what the world should be about. It’s a Brigadoon without this belief system.”

Aykroyd’s interest in paranormal spirits has parlayed into, well, physical spirits. His brand, Crystal Head Vodka, was conceived with a desire to create a pure vodka. “I realized that most brands smelled perfumy. Due to their chemistries, most drinks had high viscosity, tasted synthetic, or incorporated unnecessary additives. These companies were religious with their tradition of adding limonene, citrus oil, and sugars that would contribute to the synthetic taste of standard vodka.”

Aykroyd challenged standard practice to craft a martini without additives. Working with a virgin canvas, Aykroyd perfected a product that smells as it should—clean—and has a bit of spice and notes of vanilla.

“We found out we had a hit.” Glycerol, a known toxic cleaner used in antifreeze, was excluded. “Without the glycerol, we used a vodka distillation treatment to cultivate a versatile vodka based upon how tequila is made, meaning tequila drinkers, vodka drinkers, and mixologists are loving this.”

“And it’s perfect for UTM students because no glycerol means cleaner consumption and fewer hangovers!”

Sought to craft a vessel deserving of holding this ultra-premium vodka, Aykroyd teamed up with Texan artist and friend, John Alexander. “He handed me a drawing of a skull, and the bottle was born. It was reminiscent of the 13 crystal skulls from the legend. It was exactly what I had envisioned,” says Aykroyd.

“My vodka was an enlightened drink. These skulls were used to enlighten the tribal bands, and those who possessed them by granting them power from the other world. It was the perfect marriage of my passions.”

Distributed within 79 countries and winning 11 gold medals in the International Spirits Challenge, Aykroyd praises the award-winning packaging, innovative chemistry, and the Newfoundland water used during manufacturing.

Exploring Aykroyd’s influence on entertainment, it becomes transparent that his presence has permeated the hearts of his native land, and conversely, his own heart is bound to its roots.

“I am proud to integrate Canadian elements into Crystal Head Vodka. And that’s why I am proud to be Canadian. We are living in a place where there’s tolerance and consideration for those who haven’t had it in a long time. That tolerance is what makes Canada so special.”

Synonymous with many belief systems, thoughts of unification bind those daring to be absolved from prejudice and conflict together. Aykroyd feels that Canadian tolerance allows Spiritualism to thrive.

“I am happy to be associated with the Spiritualist movement because I believe in its importance and lessons of acceptance, something I have been granted as a Canadian. Where people can love who they want and be loved by who they want, where they want, when they want.”

To Aykroyd, Spiritualism, Ghostbusters, Coneheads, and Canadian society are all connected—each symbolizing tolerance and unity as ways to suppress division and embrace acceptance.“That’s such a wonderful concept. Paige, you and I today, tomorrow, and tonight—as time is slipping into the future—all the planet, all 7.8 billion of us in one stationary moment are sharing in the unknown. People are not as different as we are led to believe. We are all connected by inconclusiveness. And that’s what is most exceptional about human beings.”