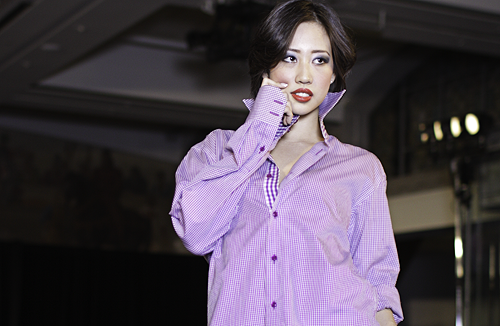 U of T’s 3rd annual Rock the Runway charity fashion show tore up the runway at the Royal Ontario Museum on Saturday night, with no shortage of flashing cameras and blinding spotlights among the jam-packed rows of eager onlookers. Hosted by the students of Woodsworth College and in support of War Child Canada, the event quickly became designated as standing-room only due to the extremely high turnout this year (last year’s event took place at the much smaller Bata Shoe Museum just up the street). Excitement was oozed from the museum’s slanted walls as attendees mingled around candle-lit tables, snagged a few hors d’oeuvres and got their photos taken red-carpet style as they entered the venue.

Many guests took their seats among the reserved areas surrounding the long runway, while others made one final dash to the bar before the lights dimmed and the crowd murmurs began to die. A man with an electric purple violin sauntered out onto the runway, playing a mesmerizing tune and drew the crowd in as they clapped and cheered. The evening’s MC, Brendan Beamish, emerged and was an instant hit with the attendees as he shared anecdotes and appealed to everyone’s Olympic spirit, before announcing the evening’s line-up that kicked off with fashions from Club Monaco, Bedo and French Connection. With the spotlights turned high and the DJ’s blaring music resonating throughout the room, the first set of models hit the catwalk and strutted their stuff. The violin player returned and accompanied the booming music with ethnically-accentuated notes that got the crowd cheering and whistling yet again. Woodsworth College’s makeshift models were professional and full of confidence as they traversed the length of the runway and posed for their photos in front of a sea of photographers, managing not to crack a smile as onlookers called out how sexy they looked.

Following the first segment of fashion, two jazz musicians stepped out with their trumpets and kept the buzz in the crowd going as the show entered into a brief intermission. When everyone settled back into their seats (with yet more bubbly in hand), the show reached a more serious note as Alison Rowe of War Child Canada stepped up to address the crowd and to convey the aims of the night’s festivities. Though the founders of Rock the Runway share a love for fashion, they also believe in reaching out beyond the community they live in, and together with War Child Canada, have been able to raise awareness for children affected by war around the world.

Rock the Runway has been able to raise over $10,000 for the War Child Canada over the past two years. With bigger turnouts expected, the event will only be more successful, according to Rowe. The speech was incredibly uplifting and remained in the back of everyone’s minds as they cheered louder and harder for the next set of designers. These products included the shoes of Jujú, the unisex tailored shirts of J(two), AllieOop’s range of handbags and the beautiful jewellery of Gay Isber (which can be purchased at the ROM and has been worn by celebrities such as Lady GaGa and Prince Charles).

In line with the evening’s trend of fashion followed by music, a group of b-boys and b-girls spread out along the runway and treated the crowd to spins, flips and hard-hitting moves that perfectly set the mood for the final designer of the night, Mis. James. Her outfits, self-described as “trendy high fashion party dresses that are guaranteed to be a show stopper,” caught the eye of both men and women for their beauty and sex appeal. As the models waved to the audience, they were joined by the rest of the evening’s models in the closing moments of the show.

Rock the Runway’s founders, Juliana White, Fatima Yusuf, Heather McCann and Randy Alexander came out to thank all of the evening’s contributors, including over 20 sponsors, and were not only given bouquets of roses for their hard work and endless effort, but were met with a standing ovation from the crowd that ended the night in style.