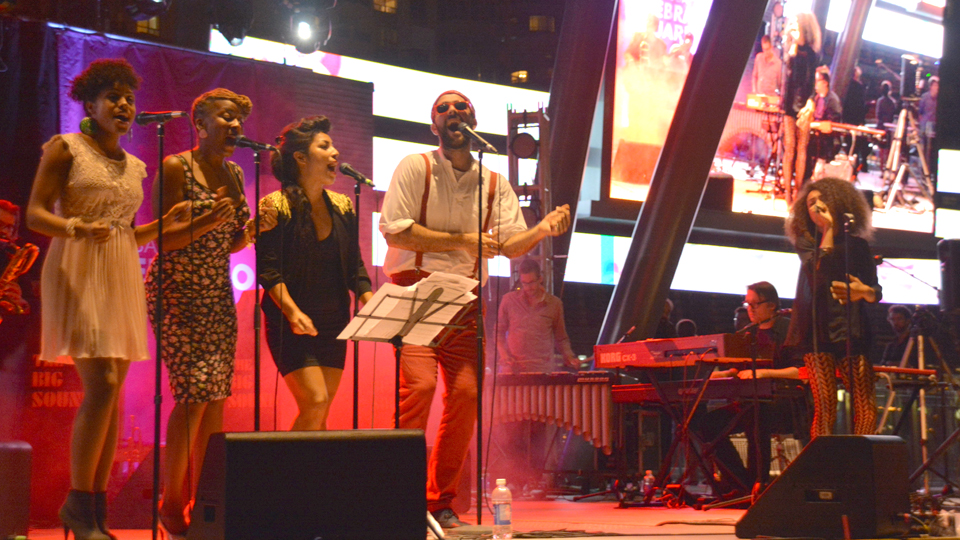 “All right, I’m really excited, so I forgot the words. Let’s be real here, you know,” confessed Tanika Charles of the Big Sound admitted when opening their show at the End of Summer Bash at Mississauga’s Celebration Square on Saturday with a cover of Martha and the Vandellas’ “Dancing in the Streets”.

The 28-piece Motown band hit the stage at 9 p.m. with an alternating group of lead singers whose voices and styles were as diverse as the audience in front of them. A backdrop of blue, purple, and red lights hung behind them, rippling in the mist of the humid September air.

I could feel the bass drum in my chest as the band belted out classics. Even so, it became clear partway through the show that the Big Sound was having trouble reaching their audience, except for an energetic group of children that had congregated at the right side of the stage.

Periodically, a few of the singers would challenge the audience, at one point asking five members of the crowd to stand or they would not continue playing. There was even a joking accusation made towards the Beaver Tails vending truck for making people sit down to eat.

The band hurried through songs from Diana Ross and the Supremes, Marvin Gaye, Sly and the Family Stone, Aretha Franklin, and many others. It wasn’t until the cover of James Brown’s “This is a Man’s World” that you could really feel the audience come alive. The male vocals were variously gritty and smooth in all the right places. Falsetto riffs had goosebumps crawling over my skin. It was an incredible performance. The music took me back to Saturday nights when my sister and I would dance around our kitchen table to the oldies while we waited for our parents to start our family movie night.

Unfortunately, I had to leave before the last song, but I had the privilege of listening to the female performer’s crisp voice among the trumpets, echoing among the traffic of Burnhamthorpe Road as I waited for the bus. I thought, “Maybe nothing is perfect, but this feels like home.”