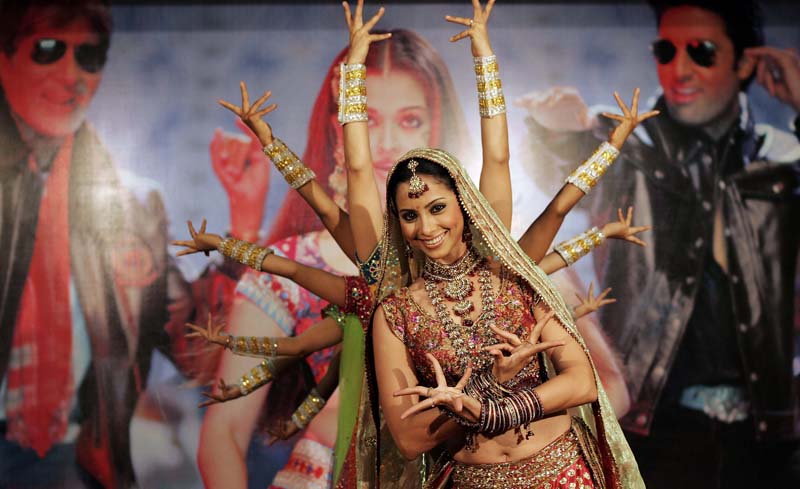 Last Thursday night, downtown Toronto got a taste of the Far East, with enough sizzle to set the CN Tower on fire. The Merchants of Bollywood, a theatrical dance spectacle, made its Toronto debut at the Sony Centre for the Performing Arts, which in fact was the only Canadian stop on its 2010 North American tour. In line with the night’s theme, Sony Centre’s resident chef, Stephen Lee, prepared a Bollywood menu of cultural dishes that guests enjoyed prior to the show, including Mumbai coconut tofu panini and Bengal butter chicken.

Divided into two acts with a myriad of dance sequences, The Merchants of Bollywood also weaves in a supporting narrative frame in which Ayesha Merchant (Carol Furtado) pursues her dream of making a name for herself in Bollywood, much to the dismay of her grandfather, named Shantilal (Chander Khanna). Although Shantilal was a highly successful director in the 70s, times have changed and Ayesha’s Bollywood could not be more of a departure from the one her grandfather knew and loved.

There were several references to pop culture, including Slumdog Millionaire, which writer and director Toby Gough playfully jabs and praises. In addition to narrating the story, Satwinder Singh Jaspal plays the roles of Tony Bakshi, an overtly flamboyant director, and Bhansingh, a gossiping matchmaker, both of whom serve as great comic relief with their slapstick antics.

The vibrant costumes and digital backdrops greatly enliven the onstage performances, while the colourful spotlights shine on the audience sporadically and serve to integrate audience members into the show. The dancing was the evening’s most anticipated element, and though the energy and commitment of the dancers in pumping up the crowd was a huge success, one could not help but notice that the more contemporary dances lacked the hard-hitting resonance of more traditional Bollywood numbers. Sequences like “The New Bollywood Generation” and “It’s the Time to Disco” feature rock ’n’ roll and disco in a distinctly Bollywood style, and though it is refreshing to see this blend of musical styles, it was mildly disappointing not to have experienced more of the traditional dance that the Western world has come to know and love. Nevertheless, it was a night of pure entertainment that was met with a standing ovation, and multiple refrains of “Get Up and Party!” in which the cast had no trouble getting the audience on their feet to sing and dance along. The Merchants of Bollywood runs until November 14 at the Sony Centre. For tickets and show times, visit www.sonycentre.ca.