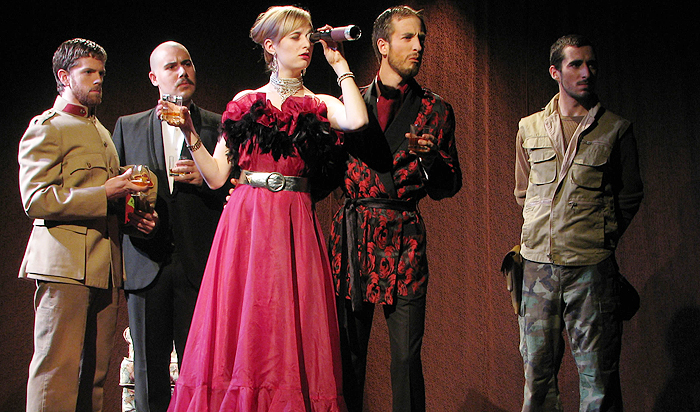 What would you do if your loved ones were suddenly taken from you without any explanation? Who would you turn to for answers? How would you cope with the uncertainty of whether or not they are even alive?

This is the severe hardship experienced by the women in Ariel Dorfman’s Widows, a raw tale that examines these women’s quest for the truth and their undying defiance against the atrocities of human nature. Directed by Bill Lane, Widows made its Theatre Erindale debut last Friday, and despite its lengthy running time of almost three hours, the adaptation was close to flawless.

The story takes place in a South American river village in the 20th century, where the women patiently await the return of their husbands, father, and sons, all of whom have mysteriously vanished. The arrival of the military sparks the hope of promising news, but when bodies start surfacing in the river, the widows’ situation becomes all the more grave.

The Women of the Valley begin blaming the elder widow Sofia Fuentes (Rachelle Magil), who has stopped working in the village to sit by the river and await the return of her men. The widows believe that Sofia is directly linked to the strange behaviour of the water, and that she should resume her role in providing for the village. When Sofia refuses, the Captain (Darren Turner) intervenes and pleas with her to leave her spot at the river, promising her that the men will return if the women behave.

While the Captain attempts to smooth over the tension that is forming, the Lieutenant (Kevin Owen) has other plans. Although the Captain is in command, the Lieutenant is the one who pulls the strings; he wreaks havoc on the lives of the widows, taunting them if they misbehave, and the naive Captain soon realizes that the new regime is corrupt and never going to change. Although he initially advocates positive change, he ends up falling victim to the underlying political agenda of the junta, abandoning his ideas and good intentions in order to retain his position. While Sofia’s stubborn nature gets her mixed up in dangerous situations with the military, she stands admirably by her beliefs and her strong will is a testament of the courage that the Captain lacks.

The women stand together in their search for justice, and while their strength is highlighted at various points, few remain unaltered by the events that unfold. Their desire to claim any corpse that washes up as their own stems from their longing to receive closure regarding the fate of their men, and while the junta wish to conceal the truth by burning bodies without a proper inquest, the widows continue to ask questions which cannot easily be ignored.

Made up of the 2009/2010 Theatre and Drama Studies graduating class, the cast delivers a powerful and emotionally-driven performance, depicting the real-life trauma and suffering of a war-affected community. Rachelle Magil gives an utterly incredible performance as Sofia Fuentes, as her hunched walk, scraggly voice, elderly mannerisms and aged appearance only graze the surface of her deeply rooted talents. Completely immersed in the character, one would actually believe that a 60-year-old was cast for the role instead of a fourth-year university student. Under the spotlight, the play’s detached moments between Sofia and her grandchildren Fidelia (Juel Hughes) and Alexis (Ramon Vitug) are extremely heartfelt and they authentically suggest their love for each other, despite Sofia’s tough exterior.

Hughes and Vitug give such strong and inspiring performances, bringing forth a childlike wonder to the plot and reminding the audience of their frailty as they try to understand the terror of a war-torn area. Kelsey Goldberg gives a convincing performance as the initially strong woman and, in the end, the broken mother of Fidelia and Alexis, and truly encapsulates the heartache only a mother could experience. Andrew Tribe plays a dual role as both the priest and Sofia’s returning son, Alonso; he gives a vulnerable portrayal of a fearful priest, forced by the military to act against his morals, as well as the shattered soul of a tortured man who will never be the same.

Mark Johnston and Melanie Hrymak play the lovers Emmanuel and Cecilia, who are plagued by the constant worry that Cecilia’s husband will return to the village. The two have great chemistry, and despite his relationship with a married woman, Johnston ironically gives a charmingly innocent performance as the Orderly. Furthermore, Hrymak subtly conveys the dilemma of a young woman who is torn between the prospect of a new life with her lover and the uncertain situation with her missing husband.

A particularly noteworthy scene between Teresa Salas (Victoria Halper) and the Captain depicts the two characters going head to head, with Teresa pleading for the body she believes to be her husband so that she may give it a proper burial and finally be at peace with herself. Halper conveys the urgency of a woman who hasn’t seen her husband in seven months and brings to light the Captain’s immorality in an enlightening and compelling way. Turner captures the irresolute nature of the Captain as he is torn between doing good and saving his own skin, and ultimately the latter decision prevails.

Turner and Johnston greatly portray the instantaneous sway of judgement a soldier may undergo when placed in extreme conditions, and the ruthless nature of military behaviour emerges within them at the end. It is highly probable that such vile conduct takes form as a result of the Lieutenant’s actions and threats, as brilliantly portrayed by Kevin Owen. He conveys the despicable nature of many army officials perfectly; his arrogant speech, sinister grin and disturbing desires form a haunting portrayal that is all too real. Owen brings something magical to the stage, and any scene in which he partakes is sure to make a lasting impression.

Though the play’s success is largely attributed to the phenomenal acting, it is enhanced even further through the frequent use of audio effects. During every scene, actors and actresses who were not on stage took turns beating drums, rattling symbols and screeching violins to a rhythmic beat that followed the pace of the characters’ speech and actions. The impact was so profound that, when necessary, it created a truly alarming atmosphere within the theatre. Similarly, Hrymak’s and Clare Blackwood’s use of their soprano registers greatly enhanced moments of nostalgia within the play, and their singing evoked such a deep level of emotion that the effect was spine-tingling. The use of lighting to create the ripple effect of water was both enchanting and ominous, making it even more realistic by Adam Cresswell’s writhing body across the floor, suggesting the floating of a corpse with the tide.

Theatre Erindale’s adaption of Widows is wonderfully astute in its attempt to shed light on the cruelty that still exists in the world, how people react when they are pushed to their limit and how some people will sacrifice anything in the name of their beliefs. Widows runs this entire week, with its closing night on Saturday, October 24.