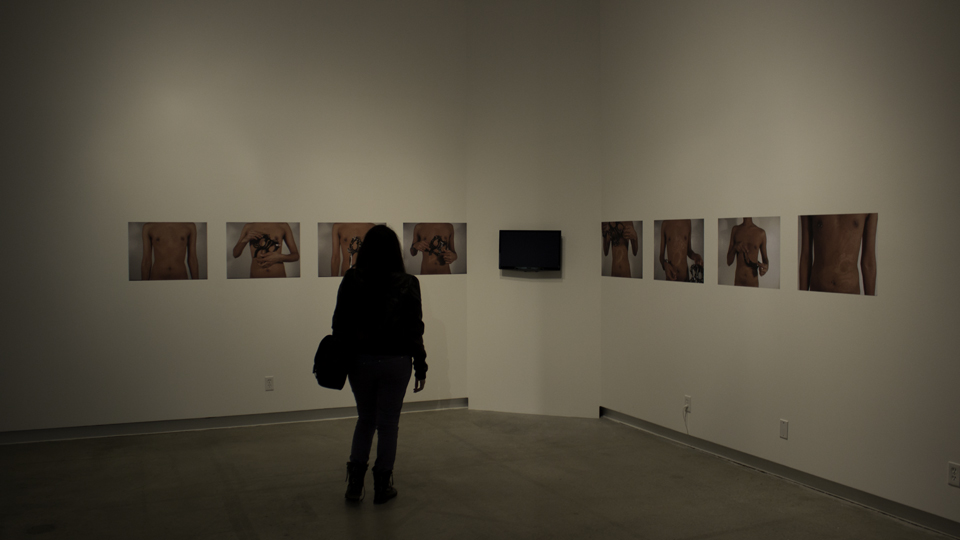 Three projectors shine their lights—one red, one green, one blue—onto a projector screen and create a rectangle of imperfect white with orange, pink, and yellow shimmering at the edges in Aryen Hoekstra’s “Out of Focus”, one of the four installations on display at the Blackwood Gallery. The work reflects the way the body acts as a prism, producing coloured refractions when white light hits it.

Its image printed in the exhibition guide, “Out of Focus” reflects the exploration of race in art, which is the theme of Red, Green, Blue ≠ White. Curated by Johnson Ngo, the installations reflect a shift away from the Western tradition of using white as a symbol of purity and perfection, instead exploring the beauty of today’s ethnically diverse world.

In Golboo Amani and Manolo Lugo’s “Covergirl”, a three-hour performance which took place on the exhibition’s opening night last Wednesday, the artists concealed each other’s faces using all of the brand’s available foundation shades, from “ivory” to “tawny”, wiping their faces on white handkerchiefs between each hue. The handkerchiefs are pinned on the wall in the e|gallery, located in the CCT Building. All 12 hues are remarkably similar, missing any hues that would fit darker complexions.

On the next wall over is Kristina Lee Podesva’s “Brown Study Colour Line”. Podesva uses the printing process of layering cyan, magenta, yellow, and black (the CMYK of conventional printing) dots in her serigraph diptych to create brown. From a distance, the serigraph appears to be a stretch of brown patterning made of spots, like an animal print. As the viewer approaches, geometric circles are visible in the pattern. Up close, the viewer is able to make out the CMYK dots that make up the pattern. The overall effect is reminiscent of a Where’s Waldo scene, in which a viewer becomes aware of individual details making up the pattern by carefully studying the image.

In the middle of the Blackwood gallery space is Chun Hua Catherine Dong’s “Hourglass”. The plain, square, white table is laid with two sets of tweezers and thin paintbrushes, napkins, and small bowls of black paint set across from each other. In the middle of the table there are two large bowls, one filled with rice, the other empty. The interactive piece invites users to sit down and paint the individual grains of rice black before placing them in the second bowl.

“It’s very meditative,” says Sophia Luo, a second-year art history and French student. “You don’t realize how much blank space there is on such a small grain of rice.”

Dong’s piece acts as an interesting response to chromophobia, which David Batchelor describes as the fear of corruption through colour. Painting the rice makes it inedible, yet transforms it into an instrument of reflecting on and measuring time. The gallery hopes to fill the second bowl over the next three months.

Markedly absent from the exhibition are labels bearing the installations’ titles and the artists’ names. This gives the viewer an initial sense of ambiguity when viewing the art. Given the theme of race, the choice might have been made to avoid allowing any ethnic suggestions in the names to influence the viewer’s initial interpretation of the work. In total, there are eight pieces exhibited: three in the e|gallery, one outside on the Davis Building wall (visible from the Five-Minute Walk), and four installations in the Blackwood Gallery, located in the Kaneff Building.

Red, Green, Blue ≠ White opened on September 18 and will run until December 1.