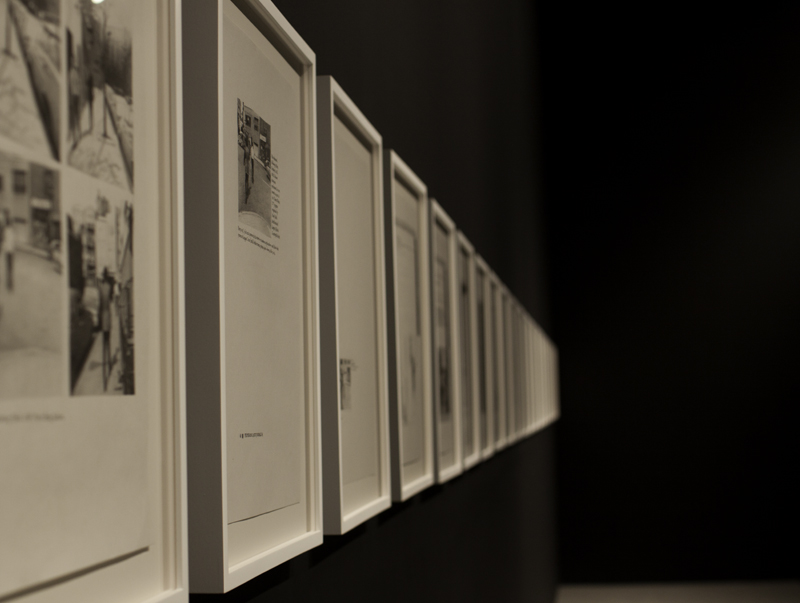 Following the massive success and undertaking of Traffic: Conceptual Art in Canada 1965:1980 last year, the Blackwood Gallery’s latest exhibit appears much more modest in terms of the physical labour and gallery space involved. The pristine white frames lining the two back walls are a departure from the Blackwood’s usual array of alternative media, yet this traditional gallery setup proves to be the perfect way of viewing Thérèse Mastroiacovo’s Following Following Piece (completed Montréal, July 2008 to June 2010) Arranged According to Numbers (exhibit running January to March 2011).

The Montréal-based artist offers a unique response to the equally unique performance piece by Vito Acconci called Following Piece (1969), in which Acconci followed people around public spaces in New York City, only ceasing the “stalking” once the person entered a private realm and thereby ended Acconci’s tracking.

Enter Mastroiacovo, who, just around 40 years later, undertook the task of researching all instances in which the project has been documented in print. She then used this amalgam of documentation to piece together Following Following Piece, in which she recreated all elements of the pages (pertaining to Acconci’s work alone) by hand. Since Mastroiacovo only chose to recreate the text written by Acconci himself, the resulting expanses of white space on the pages are an eye-catching element that begs the viewer to ask questions about its importance. The other feature on the pages is the recurrence of four images taken during Acconci’s performance, and these particular shots are the only four ever recreated by Mastroiacovo in the 53 panels on display. The intriguing thing is that from a distance, these images indeed just look like washed-out black and white photograph scans from the books themselves, but upon closer inspection, the meticulous hand-drawn details come alive and astound the viewer with their photorealism. No two pages look alike, as they are all in varying degrees of completion, and so the exhibit manages to retain a refreshing ambience.

The significance of the carefully calculated line of progression in which the panels are arranged become apparent, as the project requires the viewer to begin viewing the series from the back corner of the gallery space, moving right to left across the back wall under the illuminated spotlights. Then one must scurry over to the e-Gallery—rich, black walls that contrast the Blackwood’s immaculate white ones—for the following pages in the sequence before returning to the Blackwood and completing the circuit on the adjoining wall, where the viewer will find him or herself back at the corner where the journey began. The need to wander between spaces suggests the sporadic nature of Acconci’s pursuits across the streets and avenues of New York. The gallery’s director and curator, Christof Migone, reveals that the arrangement “formally resemble[s] a straight line, but it will not be a clean line, for it will be charged with static, the kind of static that is parasitical and noisy”, he says. “It’s an endlessly recombinant line, a followed line to follow. In time, the line circles back onto itself.” In order to assist the viewer, the exhibit guide folds out to reveal a bibliographic list of all the recreated pages in the order they appear, and helps put each frame into context.

Following Following Piece (Arranged According to Numbers) will be open to the public until March 6, 2011. Entry is free; contact the Blackwood Gallery at 905-828-3789 for further information.