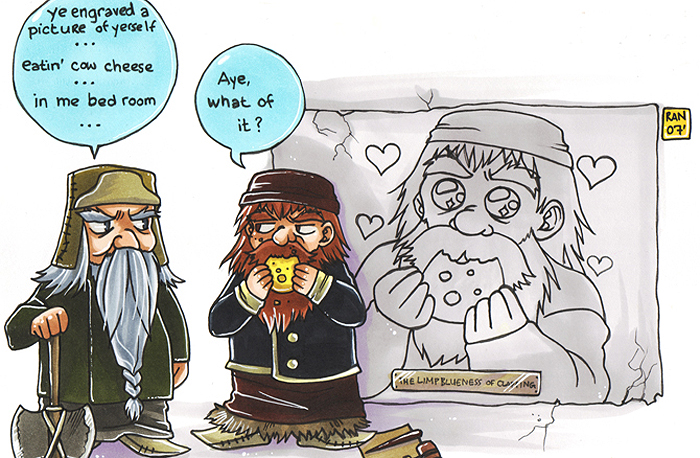 Take seven dwarves, remove any bulimic princesses, and plonk them into a wilderness replete with wild animals, goblins and the occasional vengeful spirit. It sounds like an exercise in sadism, but its just another game of Dwarf Fortress.

Dwarf Fortress, created by Tarn Adams and Bay 12 games, may take one of the most interesting approaches to losing than any other video game has: losing is fun, sometimes hilariously so.

The game takes place in a sprawling, 2D, sixteen-colour world where the player commands seven bearded smiley faces (dwarves) journeying in a realm of coloured ASCII characters.  The mission is to build a settlement that other dwarves can migrate to and live in. Think SimCity with battleaxes.

These settlements are usually named something that probably makes sense in Dwarfish, but loses its meaning in translation (Boatmurdered, Headshoots and the Grave of Green Biles all come to mind). While the players ultimate goal is to create a fortress of two hundred dwarves and find the mythical metal Adamantium, the challenges and complexities of running a fortress turns the real goal into survival. This is a game where leaders will impose import/export laws based on how happy you keep them. This is a game where your dwarves can take on professions as simple as mining to as obscure as potash-making. This is a game where dwarves exposed to too much pestilence and not enough booze will go insane and pummel everything in their vicinity. Madness? This is Dwarf Fortress.

Despite Dwarf Fortress challenges and severe difficulty curve (about 26 menus exist on the regular play screen with nothing in the way of a tutorial), its a fantastic game that will eat up time like a skeletal eagle eating an unsuspecting hunter (which can happen with embarrassing regularity). The depth of gameplay and lack of graphic detail make it an incredible experience that is made all the sweeter by the game being available for free download on the Bay 12 website. Donations are encouraged since the designers have no other jobs, and have been working for the past seven years to complete the already massive game.

Players who have mastered survival can team up with each other on the internet—a phenomenon known as a succession or bloodline game. A player will spend one year in game time establishing the fortress, then send the saved file off to someone else, all while keeping a journal of events. If done right, the journals can be a pretty neat project, and in some cases can be hilarious (Googling the tale of Boatmurdered, easily the most famous Dwarf Fortress succession game, will show this to be true).

So if youre tired of the standard shoot-em-ups, games that require actual video cards to play and going outside in the sun, consider the shorter, stockier, beardier alternative. Just remember, the important thing is that you have fun.