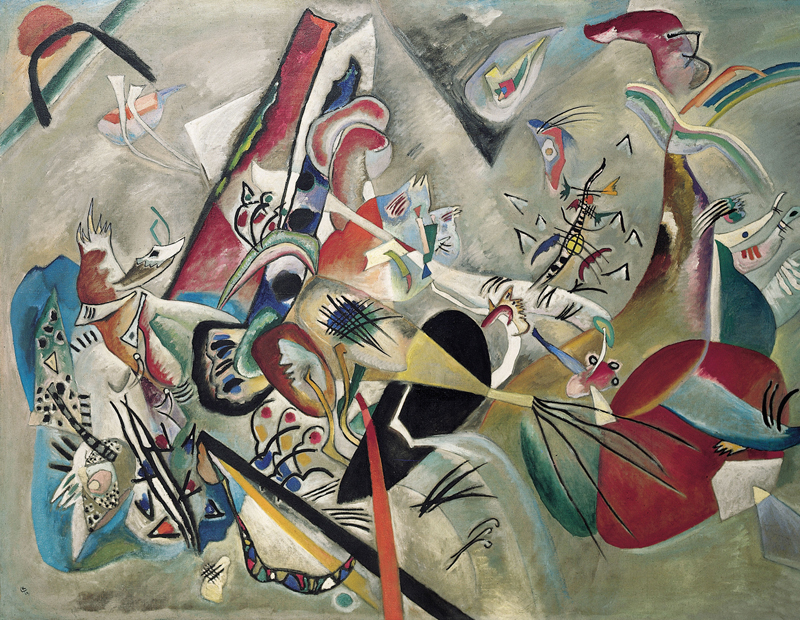 Centre Georges Pompidou in Paris must be feeling a little empty these days. The AGO has recently acquired over 100 works from the French art institution which make up the highly-anticipated and limited-time exhibition, Chagall and the Russian Avant-Garde.

The art of Marc Chagall is definitely an acquired taste; greatly influenced by his Jewish heritage and hometown of Vitebsk on the Belorussian border, Chagall’s early Modernist works address scenes of isolated Jewish wanderers and the disillusionment that resulted from the 1917 Russian Revolution. Although Chagall relocated to Paris following the Revolution where his subject matter shifted to themes of the circus and theatre – a particular fascination he held as a child – many of his images still bear a highly critical and political undercurrent while offering an escape into the world of fantasy.

Upon entering the dimly-lit exhibition space of the first room, the viewer is assaulted by bursts of colour scattered around the walls, with spotlights illuminating the paintings and panels alone.  This introduction to the Russian avant-gardists features a number of works by Mikhail Larianov and Natalia Goncharova that bear a strong Cubist influence, such as Goncharova’s vibrant pink, yellow, and orange geometric forms in “Lady in a Hat”, as well as Vladimir Baranoff-Rossiné’s subtle monochromatic browns and creams of “The Forge”. “To Russia, Donkeys & Others,” one of the first major Chagall works on display, appears in the following room, and the anthropomorphic animals inhabiting this cosmic, non-space really typify the artist’s signature subject matter, for the animals recur in a number of his subsequent paintings. Another feature of the exhibit is a so-called “biography” room, in which quotes by the artists line the walls in addition to an entire segment outlining the great impact his hometown had on his artwork, and how “[he] didn’t have one single painting that didn’t breathe your spirit”. Visitors are then encouraged to participate at the drawing station, where they are asked to express which place has a special meaning for them and then display their work on the wall.

More works from Chagall’s contemporaries appear in a dark blue room, including Goncharova’s lithographs of religious and war-related imagery, but the two main works on display are Chagall’s “Double Portrait with a Wine Glass” and Wassily Kandinsky’s “Im Grau” (“In the Grey”), the former depicting Chagall and his wife in rich colours and a fragmented Cubist style, while the latter conveys Kandinsky’s signature swirling, abstract forms and colours. The expressionistic style so far encountered in the exhibition is for the most part abandoned at this point, as curator Angela Lampe shifts the tone to the industrial and mechanical age of the Revolution. The Stenberg brothers’ architectural prototypes greet the viewer in the largest room of the exhibit, while Ivan Puni’s compositions project out at the viewer and employ materials such as cardboard, tin and gouache on plywood. The plaster models of whitewashed monuments and cityscapes are scattered around the space in large vitrines, and are linked to the room’s “Build a New World!” theme, as people were urged to start life anew following the war. Dziga Vertov’s silent film of everyday life in 1920s Russia is projected onto the back wall of the Stenbergs’ crane-like contraptions, and features highly innovative filmmaking techniques for that period, such as double exposure and slow motion. The opposite walls share a common theme of war and revolt which the artists have ultimately translated into conveying Russian pride.

The final room down the hallway features Chagall’s two most iconic works, the brightly coloured “The Dance” and “Blue Circus,” among a large selection of other circus and theatre scenes. During Chagall’s childhood, Jewish theatre was forbidden and so “the magic show” had a particular allure for him which continually inspired him right up to the end of his life at age 97. The room features a mixture of tragedy and comedy, as “Clowns in the Night” is quite gloomy and off-putting compared to the warm and inviting nature of the dancers and performers of “The Dance”. Perhaps his most recognized work, “Blue Circus” features a trapeze artist who seems to be contorting her body around like a fish out of water, and indeed the enveloping blue surroundings and presence of a fish form blur the lines between an underwater reverie and a circus routine. Chagall also dabbled in drawing, however a particular series of ink and pencil sketches are almost comical in their juvenility and stir the age-old critique: “My five-year-old could have drawn that!”

Nevertheless, Chagall and the Russian Avant-Garde is the perfect escape from the everyday, and will leave you swimming in a sea of colourful dreams. The exhibit runs until January 12, 2012 at the Art Gallery of Ontario; student tickets are available at ago.net/chagall-and-the-russian-avant-garde for $16, and include admission to the entire permanent collection.