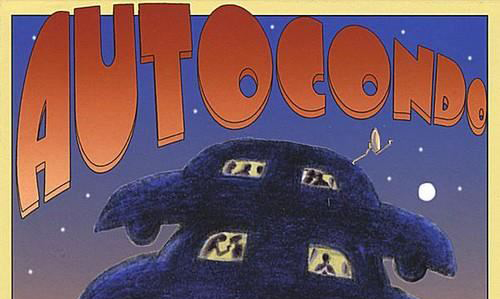 After listening to Autocondo’s self-titled album, I’m not quite sure if they’re in the business of music-making or storytelling, but rest assured that they do both like seasoned professionals.

The debut album and brainchild of Torontonians Neil Chapman, Russell Walker, and Tony Duggan-Smith falls into the genre they call “post-apocalyptic pop”, which makes sense if you look at the album’s case, which is covered in a mural of a post-apocalyptic cartoon world homes to warped transmission towers, deserted gas pumps, and you guessed it, several “autocondos”.

Wondering what exactly an autocondo is? From reading over the lengthy and detailed explanation on the band’s website, the main idea is the not-so-distant future holds a world where the only habitable locations are towers made of cars following “the demise of the Big Three automakers” and collapse of the “condo boom”. It is in this universe that the Autocondo band exists, despite the fact that not a single track on their album makes reference to this imaginative backstory.

In fact, the Autocondo bandmates share a lot of the problems that you and I have. For example, in “Paralysed” they sing “Paralysed; what if I make a mistake? / Paralysed by the choices I make.” “Paralysed” happens to be the best song on the album by far—it’s the foot-tapping first track that forecasts the high production quality throughout the entire album (but honourable mentions also go out to “Send Her Back” for killer melodies). The band’s style, which they say is heavily influenced by the likes of Neil Diamond and the Kinks, makes for easy light listening as a blend of country, folk, and rock.

Autocondo sounds like the soundtrack for a road trip with no destination. Lengthy guitar solos and even entirely instrumental songs will give plenty of opportunities to practise the air guitar.