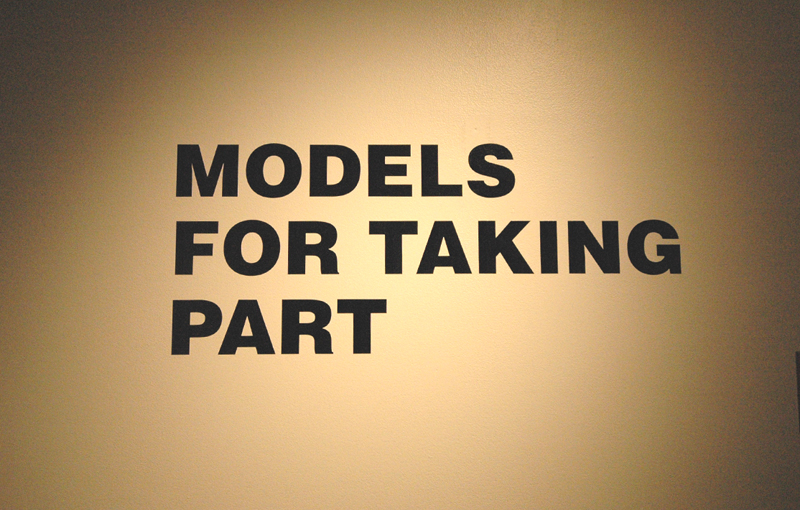 In a video projected on the gallery wall, a blonde girl of about 16, wearing a white cotton shirt, picks up a crumpled piece of paper, smiles, and whispers to the girl next to her, who is equally blonde and similarly dressed. The second girl smiles, then giggles and whispers to the girl seated next to her, who is also blonde, but less giggly and more scared. This is not a home movie, but a film from curator Juan A. Gaitán’s Models for Taking Part  exhibition at the Justina M. Barnicke Gallery at Hart House. The exhibition is composed of works by five international artists in both video and print. The works interpret how the modern public sphere is simultaneously bought together and segregated by social media, consumerism, religion, capitalism, and individual human perception.

In the first room, videos showing reenactments of Nazi-occupied Germany play next to a tour of the Apartheid Wall in Israel and alongside women’s rights protests. The first work in the gallery is a multi-screen video exhibit by Artur Żmijewski of Warsaw, Poland. This installation has a row of flat screens playing documentary vignettes on protests, speeches, and forms of self-affirmation. The vignettes are in a survey of languages and all provide English subtitles.

The next room contains two movies; one is silent, the other with audio, projected onto the white wash walls. The silent film is a video-based documentary by Berlin-based Tobias Zielony called Vele di Scampia (or Sails of Scampia). The video shows fireworks over a low-rise cement modernist  housing community in Naples, Italy.

The documentary is accompanied by photographs on the two remaining walls in this section of the gallery. The second video, The Descent of Man, and Selection in Relation to Sex by Anette Mona Chişa (Romania) and Lucia Tkáčová (Slovakia), is a tongue-in-cheek interpretation of Darwin’s book of the same name. In this film, “the blonde girls” sit on a row of chairs and play a game of telephone with quotes from Darwin’s book. The phrases get simplified and reinterpreted until they reach the end of the chain and are read out. The result is hilarious, but also terrifying.

The remaining two exhibits are in total darkness, illuminated only by the projector.

In the penultimate room, a rusted, bloodied footlocker rests on the floor under three photographs of emaciated babies in the Congo. In a film by Renzo Martens, the Dutch artist travels through the Congo and interviews dying children, plantation owners, and villagers, juxtaposing them with poverty and consumerism. This portion of his film—more a work of art than a documentary—centres on a blue neon sign Martens sets up in various villages, which reads “Enjoy Poverty”. It is at times graphic and chilling, making you thankful that you are in the dark where no one can see the reaction on your face. Gaitan  proclaimed the documentary,  Episode III: Enjoy Poverty, the “coda” of the exhibit.