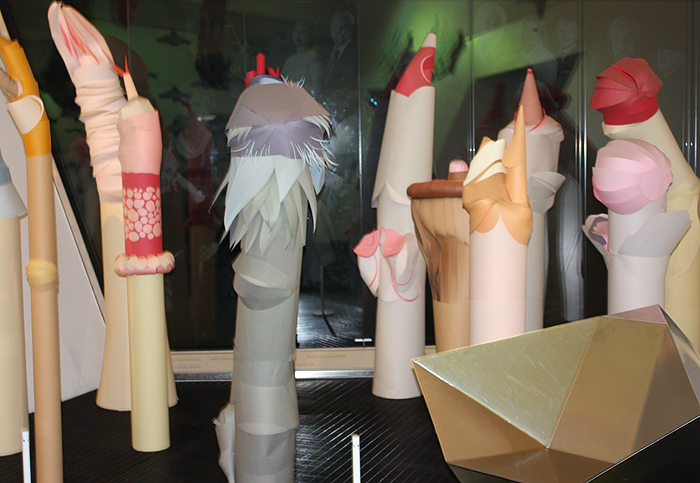 Reproduction in nature can be a strange and beautiful thing. And who better to explain the inner workings of sexuality in the animal kingdom than the often eccentric and always beautiful Isabella Rossellini?

In partnership with the Toronto International Film Festival, these one and a half minute creations written, directed by, and starring Rossellini, can be seen at the ROM from September 10 until September 20. Accompanying the film is an art installation featuring some of the set pieces from Rossellinis films, including a small forest of construction paper penises. Not too small, its a good size.

The exhibit includes a few text panels, written by Rossellini and marine biologist Claudio Campagna. I read one panel denouncing some of the methods modern fishing companies use, which offset underwater ecosystems. Although the mating habits of barnacles are surprisingly fascinating and offsetting eco systems is, in fact, bad, Im not sure what one has to do with the other. I prefer to take the films in as fluffy humor with some interesting animal facts tossed into the mix. There was no mention of proceeds going to charity, poor starving limpets or what have you, and the films dont deal with marine life sustainability at all. Any effort to use these clever, faux-art films for a higher cause struck me as a bit of an afterthought. I dont mean to say its not an important issue that the public needs to be more aware of, but preaching does take away from a good time.

The real treat about the shorts, as in the last batch, is the costuming and set design. The lo-fi paper-made props, sets and costumes are like objects out of a Michel Gondry production. The effect is a dreamy storybook—like appeal. The colorful and cartoonish sets contrasts Rossellinis straight delivery. Somewhere circa Napoleon Dynamite it was decided that when a person with an accent says something outrageous with little affectation, it is indeed hilarious. At one point, Rosellini earnestly explains some of the more lurid oceanic activities of whales whilst dressing the part, complete with a six-foot whale erection. This outlandish and dryly delivered humour suits Rossellini well.

You can check out some of the films from the exhibit online at sundancechannel.com or take in the entire last series on YouTube.