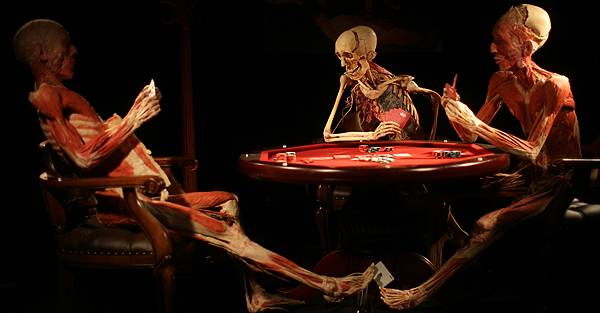 For the past two months, Gerstein Library at U of Ts St. George campus has been home to more than stressed students and medical books. The Library has also housed the 6 Meter Man, a specimen from the Body Worlds exhibition on display at the Science Center. Prominently displayed in the lobby, the 6 Meter Man is a real human body cut into thin cross sections, providing an expanded view of the body from head to toe. Given the enormous controversy surrounding the exhibition as it travelled to different museums across the world, it was surprising to see the specimen so blatantly displayed on campus.

The full Body Worlds exhibit at the Science Centre provides an in-depth view of real human (and other animal) bodies, allowing visitors to explore the intricacies of the body and understand what health and illness actually look like on the inside. It features over 200 human specimens, including whole bodies (with their hair, muscles, organs, and bones intact), individual organs and transparent cross sections.

These whole bodies do not lie sombrely in glass cases. Rather, they are artistically displayed either with their internal organs moved to unconventional places (such as on top of their heads), or in action poses as figure skaters, gymnasts and skiers that illustrate the human locomotive system in extreme and lively situations. Exhibit organizers explain that having the bodies in familiar positions make them more relevant to the public.

The creator of Body Worlds, Gunther Von Hagens, is an anatomist and physician who developed plastination, the process that prevents the body from decomposing. After death, the deceaseds internal fluids are removed and replaced with special chemicals that minimally alter the appearance of the body. Prior to death, written consent must be obtained from individuals wishing to donate their body to the project. More controversially, guardians can also provide consent for their children to be displayed in the exhibition.

Although all the bodies on display have been obtained legally, free of solicitation or monetary reward, the exhibit has faced protest in North America, Europe, Asia and the Middle East. It does not take a genius to understand why displays of plastinated pregnant women, foetuses and couples positioned in intercourse would stir up tremendous turmoil. Critics say that the exhibit lacks respect for the dead and argue that deceased bodies should be treated with reverence, not sliced open and positioned with props for the public to see.

In response, Hagens says he hopes the exhibit will educate visitors and foster a deep appreciation for the body, its adaptability, strength and complexity. The displays provide insights that no textbook can (after all, a picture is worth a thousand words), and makes such information accessible to people beyond the medical field. Anyone, from seniors to elementary school kids, can be seen walking around the exhibit, all highly engaged and interested in the material.

Everything is to scale; the textures and colours are vivid. One cant help but feel a sense of awe at the human body.
Today, in a world so technologically saturated, we often find ourselves running into such ethical dilemmas. Science and technology has on many occasions given us the tools to explore what society is not morally comfortable with. Just because we can dissect, preserve and study every inch of the body, does that mean we should?

The exhibition, while definitely interesting and educational, blurred the boundaries between right and wrong, the living and the dead, and science and education from art. One display depicted a man on his knees holding his heart in his hands, almost like an offering. Next to the display was a poster titled Heart as the Habitat for the Soul, detailing how the Aztecs, Egyptians, Christians and Jews revered the heart, and believed it housed a persons soul.

While the display was striking, thought-provoking and extremely poetic, it seemed ironic that the habitat of the soul had been dissected, chemically infused and put on display. Cartesian dualism long ago polarized the mind and body. But should we accept this theory and continue to view them in separate spheres completely independent of the other just so we can dissect and explore the body free of guilt or a moral conscious?

The latest exhibit at the Science Centre was noted most not for pushing social boundaries, but rather the towering plastinized giraffe which stood at a staggering 5.6 metres. The display is similar to the one in Gerstein Library, with transparent cross sections of a giraffe organized from head to hoof. The reconstruction took nearly two years to build. It has provided scientists with insights to the cardiovascular system, and answered the mystery of how the heart of a giraffe can pump blood all the way to its head.

Regardless of controversy, Body Worlds has had much success during its second visit to the Science Centre, having already surpassed half a million visitors. The exhibit will move to Singapore, Germany and Switzerland in late February. Who knows what new displays Hagens will unveil there?