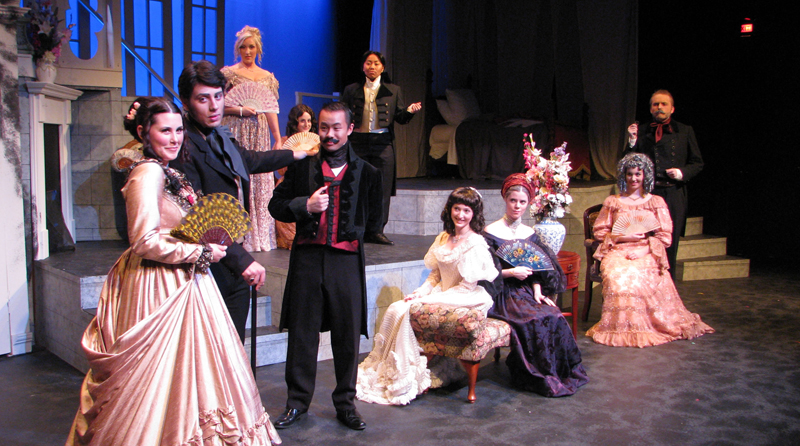 Theatre Erindale’s 2010/2011 season will be a celebration in many ways. In preparation for next year’s 20th anniversary of UTM’s Theatre and Drama Studies program in conjunction with Sheridan College, this season’s “Coming of Age” theme could not be more relevant. Not only will characters overcome seemingly insurmountable obstacles, but they will come to new realizations about themselves and of life in the process.

This past weekend, the graduating year of TDS staged a riveting performance of Charlotte Brontë’s timeless classic, Jane Eyre. Directed by Scot Denton and adapted by Robert Johanson, the play infuses a combination of tears, laughs, and intrigue into what is considered by many to be one of the greatest novels in the English language. Played by Stacey Arseneau, the eponymous heroine has been a victim all throughout her life; forced to live with a wicked aunt (Nora Williams) and cruel cousins (Matthew Gin, Hallie Seline, and Laura Jabalee), the orphaned Jane mourns the death of her uncle Reed, the only relative that ever treated her with kindness and love. Despite the luxuries of Gateshead estate, Jane is no longer able to live in such abusive conditions and upon guidance from the sympathetic housemaid, Bessie (Kathryn Alexandre), Jane eagerly departs for Lowood School for Girls. As soon as she arrives, however, she is branded a liar by the callous schoolmaster Brocklehurst (Julian Munds) and is forced to watch one of her classmates, Helen (Meghan Barron), be repeatedly struck with a stick for her “slatternly” appearance, as deemed by their equally awful teacher, Miss Scatcherd (Alison Hunt). Jane is wrongful accused of being a deceitful girl, which causes her to lose faith in herself, yet her new friendship with Helen and the kindness of another teacher named Miss Temple (Tasha Potter) pulls Jane out of her despair and gives her a taste of the meaningful relationships she has been lacking her entire life. Yet the squalid conditions of the school are so terrible that many of the girls become sick with typhoid and tuberculosis, including Helen, who dies in Jane’s arms.

The plot then shifts eight years into the future, as Jane is preparing herself to leave Lowood in search of a position elsewhere. She posts an advertisement and after receiving a response from the housekeeper Mrs. Fairfax (Kristen Zaza), Jane becomes the governess at Thornfield Hall where she must care for a bouncy and excitable French girl, Adele (Sheelagh Daly). One dark evening while walking outside, Jane hears terrifying laughter on the estate and in her fright she stumbles into a horse, and its rider falls to the ground. The injured man is Edward Rochester (Paolo Santalucia) returning home to Thornfield. As Jane and Rochester get to know each other, Jane’s reserved demeanour starts to crumble as she falls in love with the much older master of the house. Rochester, too, seems taken with Jane, especially after she saves his life in the midst of a strange fire that breaks out—even though he is engaged to the vain Blanche Ingram (Tasha Potter). Although Jane’s time was never better spent than at Thornfield, she informs Rochester that she and Adele will leave the estate upon his marriage, for she has too much pride to live there while he is married to another woman. Rochester cannot bear to lose her and, casting Blanche aside, confesses his love for Jane. With their own marriage on the horizon, Jane’s life has finally taken the course she always wanted, yet strange things begin to happen; Mr. Mason (Philip Stonhouse), a colleague of Rochester’s, is violently attacked by something hidden in the upstairs room of Grace Poole (Andrew Soutter), and the shrieking, hair-raising laughter continues to plague Jane. There is a dark secret hidden away at Thornfield, just waiting to be set free…

From the play’s opening moments, Stacey Arseneau draws the audience in with her extreme sincerity as she recounts the tales of Jane’s difficult childhood, offering commentary alongside the events as they unfold. Tiffany Feler plays Jane as a child, and though the action is frequently paused for Arseneau’s retrospective narration, she gracefully weaves in and out of the scene with minimal interruption to the flow of events. Arseneau’s later incorporation into the plot itself brings forth her conviction, her reliability as a narrator, and her clever wit as she humorously spars with the man of her future affections. In spite of the difficult choices her character must make, Arseneau ultimately conveys the power of love and the lengths a person will go to in order to be happy. Feler does a great job of capturing the childlike suffering of a girl in her orphaned state, and truly wins her character all the sympathy in the world. The masterfully despicable portrayals by Williams and Gin provide a perfect contrast to the innocent Jane, with Williams as the mean aunt we love to hate and Gin as the lying, spoiled cousin we can’t stand. Alexandre shines as one of the housemaids and Jane’s confidant, as her emphatic expression and quaintly-crafted lower class accent give her character a strong likeability.

Munds perfectly channels the character of the foreboding Brocklehurst through his grim expression, cold tone, and ominous presence, not to mention his intimidating authorial stature when speaking down to Feler’s petite Jane. In another role as the priest, Munds transitions into a more soft-spoken character, and expertly sheds any lingering characteristics associated with Brocklehurst. Hunt also convincingly portrays the terse nature of Jane’s teacher, with her pursed lips, rigid posture, and eagerness to reprimand her students enough to make anyone tremble with fear. Barron gives a particularly touching performance as a girl who takes abuse without objection, and is accepting of the fact that she will die young, for then she won’t have to experience any more of life’s tribulations.

Though many actors and actresses play dual or even triple roles in the performance, Potter is of particular note for her ability to convey the pleasant and caring nature of Miss Temple towards young Jane, while adopting a completely different approach to Blanche Ingram, in which she is narcissistic, judgemental, shallow, and cruel to the grown-up Jane. On another note, Potter’s beautiful soprano voice was truly impressive, and garnered much applause from the audience. Sheelagh Daly is a constant source of entertainment as Adele, encapsulating the animated and hyperactive spirit of a pampered child, while also infusing her fluent French into the conversation. Andrew Soutter’s role as the recluse maid Grace Poole provides an air of mystery to the plot, and his second role as the clergyman who takes Jane into his home is a charming one, whose bizarre requests were of particular amusement to the audience. Although Chrissy Chau plays a number of roles, it is her main role that provides the climax of the story (which would be a shame to reveal, so I’m not going to!), and her performance is really one of the most unexpected and most dramatic to watch. Zaza, Stonhouse, Jabalee, and Seline all deliver great supporting roles, as do Kelsey Jenkins, Stacey Gawrylash, and Cameron Laurie. Last, but definitely not least, Santalucia’s performance as Rochester is strong and commanding, yet at times sensitive and charming, providing the perfect counterpart to Arseneau’s shy yet quick-witted Jane. His performance wonderfully showcases the full range of his acting abilities, from dramatic to comedic to deeply emotional, all moments that are as natural and convincing as the next.

Carolyn Nettleton and Lizzie Stuart-Morris excellently incorporate light and sound into the scenes to set a grave mood, while Joanne Massingham’s gorgeous costume design enlivens the atmosphere of Victorian England. The entire cast nails varying degrees of English accents and delivers quite believable scenes of violence, and all of it serves to elevate the enjoyment of the performance even further. The cast does a fantastic job in all facets, yet most of all in making a 19th-century play relevant to our lives today. Despite the adversities we must face and no matter how much pride we have, the goodness in people and the eternal human desire to love and be loved ultimately trump everything else in our quest for a happy ending.

Jane Eyre runs October 26 to 30 at Theatre Erindale; for show times and ticket prices, visit their website at www.theatreerindale.com.