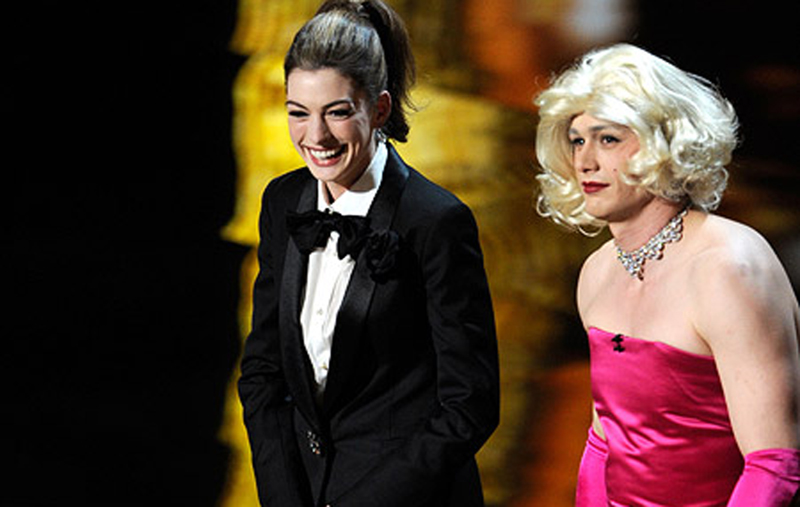 After a very predictable awards season, the Oscars did nothing much to spice things up. Hollywood’s most important night was big and beautiful, but not bold. First-time hosts Anne Hathaway and James Franco were supposed to bring a young and hip vibe to the show, but instead they made it as boring as ever. While Franco seemed to be in his own little trance, Hathaway tried to compensate for his lack of presence, and therefore their dynamic was a bit of a mess. However, it wasn’t entirely their fault.

Whoever was in charge of writing the ceremony did an awful job. Not only the hosts but even the presenters had practically no material to work with. The pressure to reach a younger demographic, as well as to keep the show fast-paced in order to not go over the three-hour mark as it does most years, was not worth the trouble; it was one of the worst broadcasts the ceremony has ever had.

Not only was there a lack of humour, but even the star power seemed a little low. Big stars like Jack Nicholson, Meryl Streep, George Clooney, etc., were curiously missing from the Kodak Theatre. Instead there was a new crop of Hollywood A-lists who paled in comparison to the big stars that are usually the exciting people to see at the event.

On a slightly positive note, the opening that placed Anne and James into the world of Inception (and other selected Best Picture nominees) was mildly funny, though it’s been done much better in past years. The montages were very nicely executed, but it did seem to push The King’s Speech a little too much. Having all 10 movies playing to the speech of King George VI was fitting, though it did kind of give a hint as to who would be winning the big award. Billy Crystal’s appearance on stage, paying tribute to Bob Hope on the first televised Academy Awards, reminded the audience of how much better the show could have been if a comedian, specifically one of the two men themselves (though Bob Hope is no longer with us), had been hosting that night. Among one of the funnier (or rather the few funny) segments was the Autotune bit, where Harry Potter and the Deathly Hallows Part 1, Toy Story 3, and Twilight: Eclipse were made into music videos using the popular YouTube effect of Autotuning regular dialogue. However, the joke seemed to aim only at a young crowd in the digital age, and was not too fitting for older audiences. The reflection on Oscar winners in all past categories was a nice touch, but it also seemed to take away from the current winner.

Now, for the actual awards (which are technically what the show should really be about), the winners could not have been more predictable. The only real surprise was Tom Hooper taking home Best Director for The King’s Speech, when that prize was much more deserved by David Fincher for The Social Network. As for Best Animated Feature, though it was a very strong year for animated film, there was no doubt that the award would go to Toy Story 3, which also had a Best Picture nomination. That fact in itself basically omitted the need for an Animated Feature category, but the other two films nominated, The Illusionist and How to Train Your Dragon, still deserved their honourable mentions.

For the acting categories, Melissa Leo, despite her controversial self-published ads and Oscar campaign, still picked up the Best Supporting Actress trophy for The Fighter, in which she was clearly the best out of the nominees. Her infamous “F-bomb” moment on stage has already been criticized as premeditated due to her starvation for attention, but it would be nicer to believe that it was a genuine in-the-moment slip. Either way, it did make for one of the most entertaining moments of the night, as well as Kirk Douglas’ drawn-out presentation of the award. Christian Bale finally took to the stage to accept his own Oscar for Best Supporting Actor in The Fighter. Though he has never been nominated, he has had many noteworthy performances in his career and it was about time he got recognized. Natalie Portman picked up her first Oscar for Black Swan, and though her performance was incredible and iconic, it still was a very strong year for the Best Actress race, and any of the other winners would have been equally as deserving. She made up for her mess of a Golden Globe speech at the Oscars, though, playing it completely safe and giving quite possibly the most boring speech of the night. And last but not least, Colin Firth won his first Oscar for playing the stammering Duke of York in The King’s Speech. Though he is a very talented actor who has been in the business for a long time, it’s kind of funny how “due” he was made out to be for an Oscar after only his second notable performance (and nomination—the other being last year’s A Single Man). In all, though anyone could have guessed these four names for the acting categories, they were all very deserving winners.

The Best Picture race was also very predictable, though the big question was whether the Academy would go the “young and relevant” route, the way they tried to with the ceremony itself, by choosing The Social Network, or would it go the “safe and traditional” route, by picking the winner The King’s Speech. Either film would have been a very worthy win, but The King’s Speech did have an advantage over The Social Network in that it was a film with heart.

Though the show itself was quite a bore, 2010 was an exceptional year for film, and seeing the right people get recognized was still a delight. Beautiful gowns, beautiful people, and unforgettable talent still managed to fill the Kodak Theatre, and though the show could have been so much better, especially with its hope to reach a younger demographic, the Oscars are still an event that everyone who appreciates film should have tuned into. Hopefully, next year the Academy will take a hint, and if they want to continue the route of dual hosting, a good suggestion would be Russell Brand and Helen Mirren, possibly the only good presenters of the night. It goes to show that just because someone is a good actor doesn’t mean they have the power and appeal to carry out a three-hour ceremony. Sorry, Anne and James, but that refers to you.