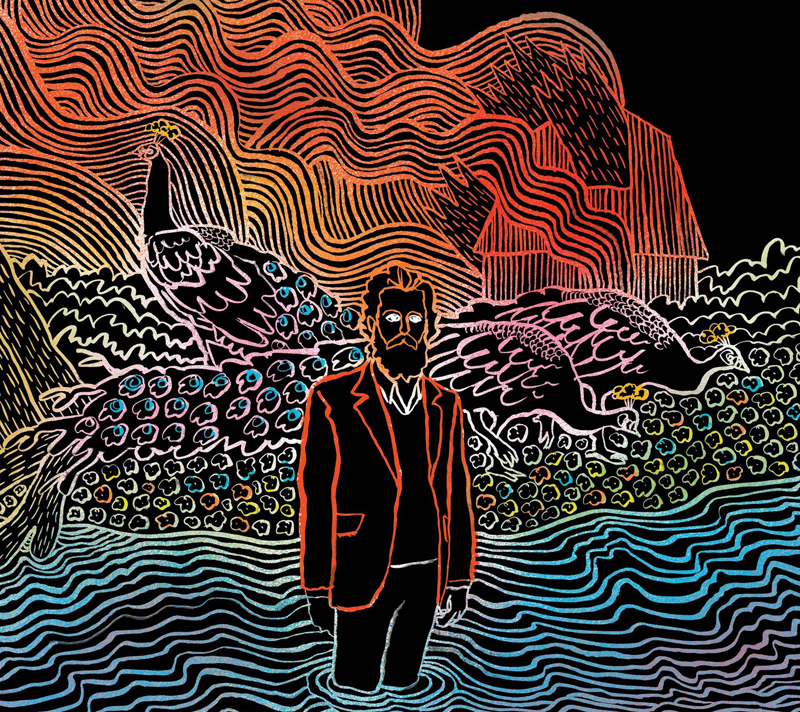 American singer-songwriter Sam Beam, better known by his stage name Iron & Wine, has once again proved his lyrical and musical genius with his latest album, Kiss Each Other Clean. After almost 10 years with alternative rock label Sup Pop Records, the album marks Beam’s first work with a major label, Warner Bros. The new album, released on January 25, seems to be a mix of the old and the new, featuring departures into new sound, yet always with the same striking lyricism and subtle beauty of the classic Iron & Wine. But is the album’s sound too “new” for fans and critics to handle?

After the success of Beam’s intimate and stark acoustic renderings on 2004’s Our Endless Numbered Days, this latest album seems to be picking up where Iron & Wine’s third album—2007’s The Shepherd’s Dog—left off. Gone are the lo-fi, whispery lullabies of Beam’s early career, replaced by a new rhythm-infused sound and a new record label. And although Sam Beam is no longer whispering his lullabies to us, it’s clear that he’s still singing to us on top of the saxophones and tribal rhythms of his new album.

Yes, that’s right: Iron & Wine is using saxophones, synthesizers, marimba, and glockenspiels alongside that smoky, austere voice. And this is what seems to have the diehard Iron & Wine fans polarized, because funky instruments and rhythms just aren’t what they fell in love with almost a decade ago.

Despite all this, fans should not be put off by Sam Beam’s venture into new musical territory. There are some things that haven’t changed; that grizzly beard and gentle voice of his aren’t going anywhere anytime soon. Although Beam might have defied their expectations, fans can still expect the same rootsy folk sound and evocative lyrics—staples of Iron & Wine’s charm—with some new funk and soul blended into the mix. The album’s third track, “Tree by the River”, starts out with synthesizer and soft drum beats, as a chorus of “ahh”s breaks into the surprisingly catchy, clearly pop-influenced number. In a recent interview with Spin magazine, Beam described the new album: “[It’s] more of a focussed pop record. It sounds like the music people heard in their parents’ car growing up… that early-to-mid-70s FM, radio-friendly music.” It’s exactly this feeling that comes across on “Tree by the River”, and the fifth track, “Half Moon”, but seems to be lost amidst the new sounds and rhythms of other tracks.

The opening track, “Walking Far from Home”, starts up with distorted, fuzzy synthesizer chords, then swells with Beam’s strong yet gentle voice and onslaught of evocative imagery, to die in another jumble of fuzzy synth. The second track, “Me and Lazarus”, has Beam spilling out his usual sharp southern-gothic lyrics, recounting the story of a Biblical friend and their Faulkner-esque adventures: “Me and Lazarus, we shovel all the ashes out / He’s an emancipated punk and he can dance / and I’m a liberated loser that can roll / but where my pocket was, I’m peeking through a hole.” The sixth track, “Rabbit Will Run”, features a glockenspiel keeping rhythm in the background, and another fuzzy synth crackling behind Beam’s voice. But the moment the sporadic wooden flutes and tribal rhythms begin to blare, it’s clear that Beam has indeed decided to throw himself full force into a new, quasi-experimental sound.

The song is more reminiscent of traditional African rhythms than any 70s radio-friendly style that Beam had in mind, and the searing new lyrics are a far cry from the gentle, intimate lullabies that fans have grown to love. “ ’Cause a rabbit will run and a pig has to lay in its piss,” sings Beam towards the end of “Rabbit Will Run”. Now there’s a lyric that fans were surely not expecting.

The album even closes with a sound that seems all too strange for the quiet, folk-singing Sam Beam, sounding more like something off of a Bee Gees album than something fans would ever expect from Iron & Wine. But the 70s radio-friendly, funk and soul influence is clear in tracks like this one, as horns blare in the background and a funky electric guitar lick repeats itself over the blaring of several saxophones.

It’s clear that the new Iron & Wine effort is nothing like the old acoustic folk songs fans have come to know and love, and it’s exactly this that critics and fans alike have complained about, stating that the album is overproduced. Just one visit to Iron & Wine’s Last.fm page and it’s clear that some fans are confused, some are disappointed, but some are embracing Sam Beam’s new sound musical evolution.