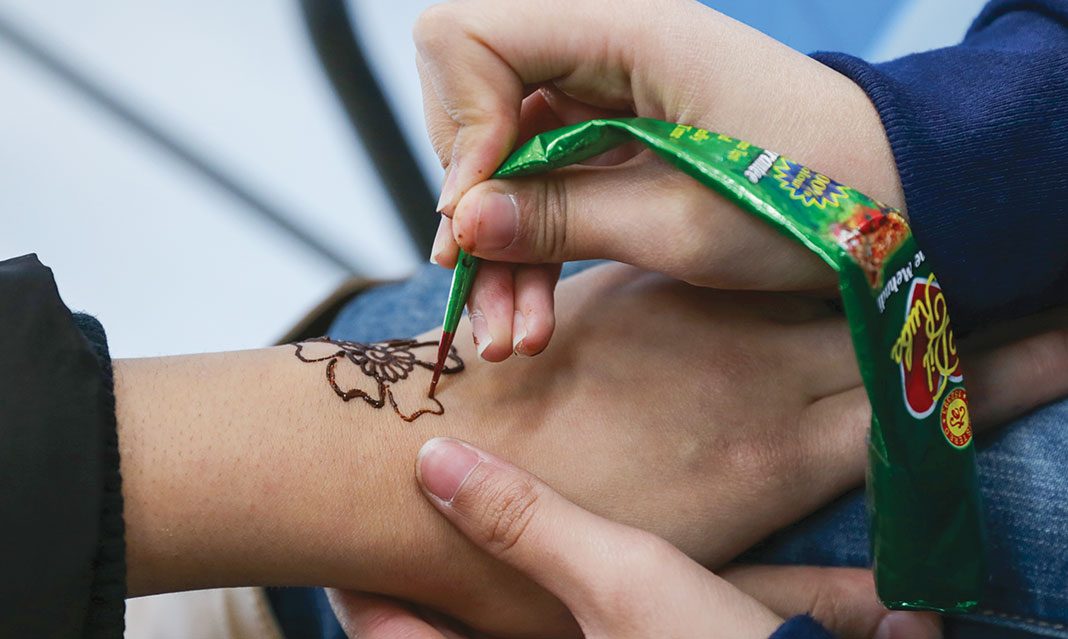 In the last week of November, the Undergraduate Commerce Society hosted Five Days of Giving—an annual week-long charity event. In setting up the week’s activities, UCS collaborated with on- and off-campus organizations such as the UTM Residence Council, UTM Free the Children, the SickKids Foundation, Our Place Peel, and the Mississauga Food Bank. Each day of the event took place in a different on-campus location. The third day of the event, which took place this past Wednesday, offered henna services by UCS’ treasurer Neha Naeem and volunteer henna artists. Henna stations were set up in both the student centre and OPH.

Naeem, a fourth-year accounting and economics student, was the event’s henna artist stationed at the student centre. Participants donated a minimum of five dollars to have their hand decorated with henna.

Naeem explained that the plan for the henna stations was initiated by Rabeeyah Jabeen—the society’s former corporate social responsibility director.

“[Jabeen] had an idea. She wanted to do something creative. She knew that I could do henna, so she asked me if I wanted to do this. It’s nice to give back to the community.”

Naeem stated that she has been involved in henna artistry since high school. At first, Naeem said that the activity was “just for fun.”

“I used to do henna on myself. Then, my cousins started asking me if I could do henna on them. Through that, I started to learn and I used to experiment doing henna on my cousins’ hands,” Naeem said.

In her first year at UTM, Naeem started a business offering henna services. Naeem has experience with bridal and party-event henna. She explained that henna coverage varies—bridal henna involves the decoration of the bride’s feet and ankles. For the UCS henna station, Naeem decorated only one of the participants’ hands.

Naeem stated that she draws inspiration for her henna designs from Eastern clothing.

“I’m from Pakistan. So there are a lot of designs with embroidery and sparkles. Through that, I get inspired,” she said.

Patricia Ly, a fourth-year accounting specialist and economics major, as well as the operations and IT director of UCS, emphasized the event’s focus on charity.

“[The event] provides the University of Toronto Mississauga with the opportunity to give back to the community through non-monetary donations, monetary donations and volunteering,” Ly said. “UCS and its partners strongly believe that it is our duty to give back to the community. This five-day charity event allows for everyone on campus to learn the importance of giving back and how they can do their part for our community.”

When asked about the reception of the event, Ly said that students were drawn to both the cultural and charitable aspect of the event. Ly also said that word-of-mouth attracted many students to the henna stations.

“A lot of students joined later in the day after hearing from friends who had their beautiful henna done,” Ly said.

Ly, who also received henna decorations for the first time at the event, said that the experience was “truly rewarding.”

“It was a great experience to learn about henna while also knowing that my donation would be helping those in need,” Ly explained.