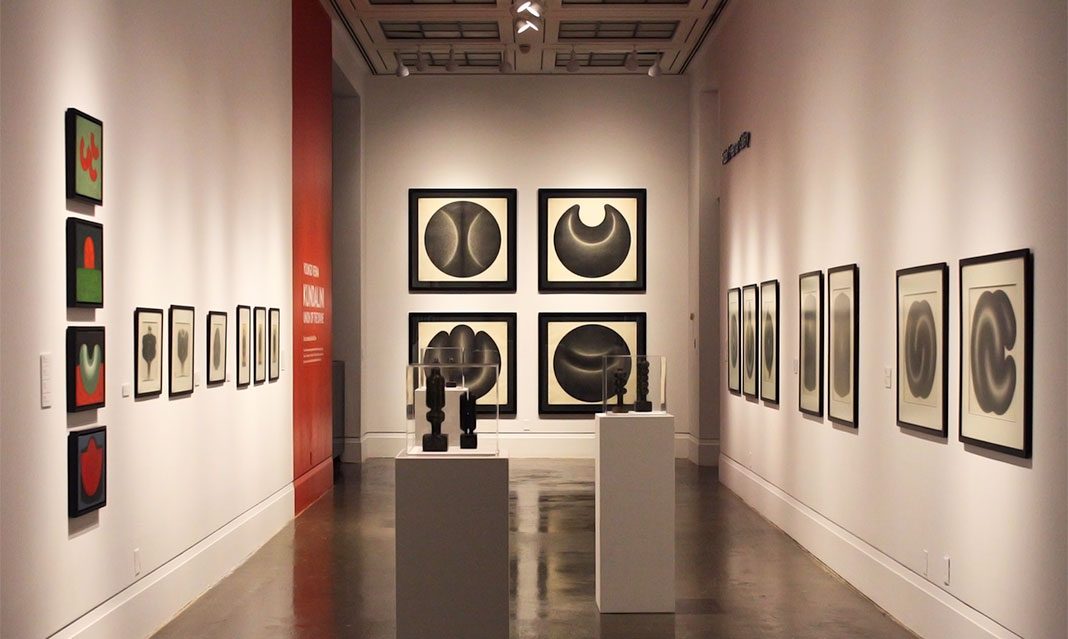 Currently on display at the Art Gallery of Mississauga is Youngo Verma’s exhibition, Kundalini: Union of the Divine. According to the PDF of the exhibition available on the AGM’s website, the display features a collection of drawings, paintings, and sculptures that span over 40 years.

Kundalini is a Sanskrit word, kund meaning “to burn” and kunda meaning “to coil” or “to spiral”. Verma’s artwork is designed to reflect “the concentrated field of intelligent, cosmic invisible energy absolutely vital to life.” The title of the exhibition implies that the Kundalini is the union of the Will, Knowledge, and Action leading to the Union of the Divine.

Verma (1938-2014) spent approximately 40 years in isolation working on his craft. During this time, he examined and explored the idea of Tantra and its connection to cosmic energy. The Tantric method includes contemplation and ritual practices, which desire to convert the divine energy of the macrocosm into the human microcosm to achieve Moksha: a state of freedom, self-actualization, and self-knowledge. Verma’s paintings resonate with Tantric Hinduism beginning in the fifth and sixth centuries, whereas his drawings reflect Tantric Buddhism.

Kundalini: The Union of the Divine displays three diverse and vital periods of Verma’s work. Like many other artists, Verma kept secret artwork. His figurative illustrations were discovered after his death in 2014. They were completed in Germany in the 1970s, yet remained hidden from the public until his passing. These extraordinarily original drawings explore the concept of duality, as they portray humanlike alien figures, grounded despite their wings, with lively forms of energy that jump out at viewers.

Verma created his sensual and mystical Tantric paintings and drawings in Canada in the 1980s. They represent a distinct evolution from his earlier work. The minimalist and abstract paintings explore spiritual linking between the Divine figures, Shivalingam and Om. These paintings pay tribute to early abstract paintings from India, which were used chiefly for reflection and represented deities as geometric, richly-hued forms. The early Tantric paintings were inspired by the handwritten Tantra treatises from 6 B.C.E. They were duplicated many times throughout their existence until the 17th century, when they developed into a multifaceted symbol of cosmology.

Verma’s third period of work includes a small number of illustrations completed in the last 15 years. They signify an in-depth examination of cosmic energy through the medium of graphite on paper. Verma illustrated relentlessly, sitting cross-legged on the ground with classical music playing in the background.

During this period, he said, “Every day after breakfast, I sit in Tapasya and paint what comes to me. I am thinking of the skies, cosmic energies up high above, and my hand moves automatically. This is a process during which I don’t think of Earth and earthly things. At that point, I only know that my hand is moving. I am a Fakhir. This is the great advantage of me being in solitude. I can get absorbed in this without being disturbed.”

Kundalini: Union of the Divine is on display at the AGM until September 11.

Files for this story: